If severe weather happens near you, we want to hear your story. Share your photos and videos with CNN iReport, but please be careful.
See more coverage from CNN affiliate WAPT and WTVD.

(CNN) -- A violent rash of fast-moving storms churned north Saturday, ripping off roofs, toppling trees and pushing the three-day death toll to 26 as possible tornadoes moved into the mid-Atlantic states.

More than 100 twisters were spotted across the region, according to the National Weather Service, which reported seven casualties in North Carolina. 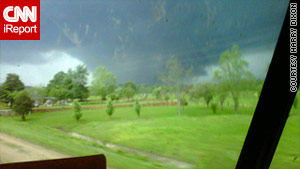 Harry Dixon was driving on Highway 16 when he took this photo of a funnel cloud near DeKalb, Mississippi.

Julia Jarema, a spokeswoman for the North Carolina Division of Emergency Management, said the state suffered multiple fatalities but declined to give a specific number.

The "destructive" and "extremely dangerous" tornado had barreled into North Carolina early Saturday evening, prompting emergency warnings for much of the central part of the state.

Two rotating storms triggered tornado watches and warnings up through the Richmond, Virginia, Washington and Baltimore areas, according to the National Weather Service.

"We're expecting large violent tornadoes that are going to stay on the ground for a long period of time," said CNN meteorologist Jacqui Jeras. "This is a high-risk day," she added. "We only get a handful of days like this every year."

Meanwhile, emergency crews in Georgia, Mississippi and Alabama worked to assess the damage as the storm system moved north through the Carolinas and up into southern Virginia.

On Friday, Alabama Gov. Robert Bentley declared a state of emergency after reports of tornado touchdowns in at least six counties.

Multiple injuries were reported in Sumter and Marengo counties, with at least one fatality in the latter, he said.

Three people were also killed in Autauga County after fallen trees crashed into mobile homes in the area, police said.

Two other deaths were previously reported in Oklahoma and seven in Arkansas.

In Greene County, Mississippi, one death and six injuries were reported, officials said.

But by Saturday, hazardous weather warnings were taken down across the states, the weather service reported.

The city of Clinton, Mississippi, suffered "extensive damage" when a tornado touched down, according to Mississippi's Emergency Management Agency.

The city's mayor said no one was injured in the storm, which tore the roof from a hotel and caused major damage to a bank and numerous homes. It narrowly missed an elementary school and a church daycare center packed with about 650 children between them, she added.

"We have a lot to be grateful for," Mayor Rosemary Aultman said. "It could have been a lot worse."

The tornado in Clinton was one of several reported Friday in Mississippi and Alabama that cut a wide path of destruction.

CNN affiliate WAPT in Jackson, Mississippi, showed video of the destroyed home of a teacher at Hinds Community College.

Several of her students were at the house, helping to clean and salvage what they could from the wreckage.

"I've never seen anything like this," said one student. "My heart dropped because it hurt me to see my teacher's home like this. ... I know it's hurting her, but she's being strong about it."

In Alabama, tens of thousands of fans gathered for a weekend of races at the Talladega Superspeedway, which had been under a tornado watch until 9 p.m. Friday

Some 30,000 people camped out, some in tents, on the infield of the speedway, said Steve Dover, spokesman for the Talladega County Emergency Management Agency. Thousands more were seated in the grandstands, he said.

By Saturday, the severe weather had relented, allowing the Superspeedway to open its gates to waiting fans, according to Talladega spokeswoman Hannah Kinderknechd.

A tornado watch remained in effect until 9 p.m. Saturday for eastern North Carolina.

They left a trail of downed trees and power lines, scattered cars and crushed homes as it moved east.