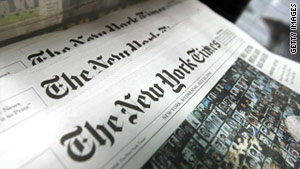 (CNN) -- The Los Angeles Times and The New York Times were awarded two Pulitzer Prizes each Monday for their outstanding work in journalism.

The New York Times' Clifford J. Levy and Ellen Barry won in the international reporting category for their work on the struggling Russian justice system, while the paper's David Leonhardt won for commentary.

The Los Angeles Times won in the public service category for its coverage of Bell, a small California city where officials' sky-high salaries sparked national outrage and then arrests. The paper's Barbara Davidson won for feature photography.

Surprisingly, given big news stories last year like the oil spill in the Gulf of Mexico and the earthquake in Haiti, the prize board did not name a winner in the breaking news reporting category, a traditional favorite.

The Pulitzer Prizes are U.S. awards handed out once a year to recognize outstanding work in journalism and the arts.

Read bios and more about this year's winners

Jennifer Egan's book, "A Visit from the Goon Squad," won the award for fiction. Her book is about growing up and old in the digital age, the board said. In the music category, Zhou Long won for "Madame White Snake," which was premiered by Opera Boston at the Cutler Majestic Theatre in February 2010.

Paige St. John of the Sarasota Herald-Tribune in Florida won the investigative reporting award for her coverage of the state's property-insurance system. ProPublica's Jesse Eisinger and Jake Bernstein won in the national reporting category, while three photographers at The Washington Post won for breaking news photography for their work around the earthquake in Haiti.

Here is a complete list of the 2011 Pulitzer Prize Winners:

Fiction -- "A Visit from the Goon Squad" by Jennifer Egan (Alfred A. Knopf)

Biography -- "Washington: A Life" by Ron Chernow (The Penguin Press)

Poetry -- "The Best of It: New and Selected Poems" by Kay Ryan (Grove Press)

General Nonfiction -- "The Emperor of All Maladies: A Biography of Cancer" by Siddhartha Mukherjee (Scribner)