U.S. troops to get better helmets and 'ballistic boxers' 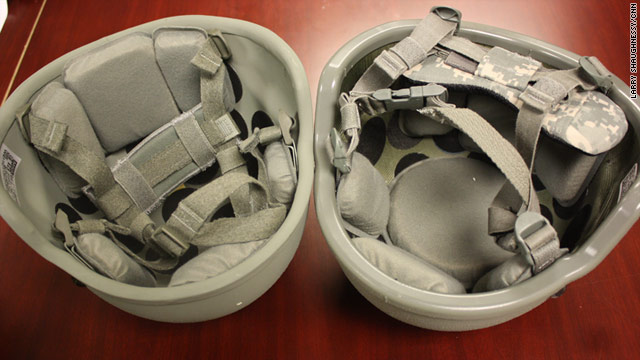 Washington (CNN) -- Whether it's an Army helmet with a thicker shell and better padding, or underwear that can protect a Marine private's privates, the U.S. military is looking at sending the latest gear to Afghanistan so the troops can come home safe and sound.

Next month, the Army is going to start sending the "ballistic boxers" to soldiers in Afghanistan, and the Marines intend for each of their troops there to have four pairs of the "protective undergarments," as they are formally known, before the end of the year.

The heavy silk boxers, which look like shorts that professional cyclists wear, won't stop a bullet or shrapnel from an IED. But the silk can stop small projectiles like those kicked up by an explosion.

"It is expected to prevent fine sands and particles that are thrown up by explosives, so that the tissue wounds are cleaner, less ragged and easier to treat," said Lt. Jamie Larson, a Marines Corps spokesperson. And since the silk is treated with antimicrobial agents, the boxers help protect injured troops from wound infections.

While it may not sound like it affords much protection, silk is actually a very strong fiber, said Brig. Gen. Peter Fuller, who heads the Army office that tests and develops new protective gear. He noted that silk was used by medieval knights "under the mail armor" to protect against wounds from swords and other weapons.

The Marines haven't actually started buying the boxers yet, but the Army has chosen boxers from a company in Northern Ireland called Cooneen Watts & Stone that is already making them for the British military in Afghanistan.

Silk boxers aren't the only step the military is taking to protect the groin.

They are testing various cups that a male soldier will wear over his genitals. One of the cups being considered is made of stainless steel; another is made from high-molecular-weight polyethylene, a plastic that is lighter than Kevlar but better at stopping bullets.

"They all basically work to slow down the fragments. We are looking to prevent penetration of the genitals," said Col. Bill Cole, an Army officer overseeing projects aimed at better protecting soldiers.

In addition, the Army and Marines are looking at undershorts that will have pockets that will hold Kevlar pads to protect the wearer's femoral artery, the main blood vessel to the legs.

While Kevlar may be the answer to protecting arteries and groins, Kevlar helmets may soon be history. Kevlar is a fabric that can, when arranged in multiple layers, stop most bullets.

The Army and Marines are working on upgrading their head protection to the Enhanced Combat Helmet (ECH). The outer shell is made from the same high-molecular-weight polyethylene plastic being investigated for groin protection. The thicker protective shell would make the helmet lighter than the current Kevlar model. The Army hopes to start giving those to soldiers in Afghanistan by November.

Army officials recently met with counterparts from the National Football League and NASCAR to study ways to design helmets that provide better protection from blunt force contact. They came away with an understanding that U.S. military helmets are already very good.

But a study by Moss at the Lawrence Livermore National Laboratory in California found the military helmets could be better, especially the foam padding inside the helmet. "We decided to change the thickness of the foams and look at the results," Moss said.

Currently, Kevlar helmets come with 3/4-inch foam pads inside. In recent months, the U.S. Army has provided some soldiers with 1-inch pads to make the helmet fit better.

By adding a quarter-inch of padding, or even an eighth of an inch, "there is a very big effect" -- a 24% reduction in force to the skull, to be exact, Moss said.

But that discovery spawned other concerns. The Army doesn't have any pads that add even one-eighth-inch of padding to the current helmet, according to Brig. Gen. Peter Fuller. Adding even that much padding may force soldiers to move up to a larger-size helmet.

Right now about half of all soldiers wear large helmets. An extra-large weighs a half-pound more, and according to Cole, when Army soldiers were asked about wearing a heavier helmet they said they don't want it "if it's even an ounce heavier."

Another project in development to help protect soldiers' heads is a sensor that keeps track of sudden shocks to the helmet. The wireless sensor is about the size of a silver dollar that fits inside the helmet, under the pads, and works similar to a flight data recorder in a passenger jet. The Army plans to use the data from the sensors to help better understand what happens to a human brain exposed to sudden blunt force.

One day, doctors in a combat hospital may be able to take the sensor for a soldier who is being treated for IED injuries and download the data on the sensor and better understand what exactly the soldier was exposed to and how strong the explosion was.

But that, like much of the other technology being tested and developed, will not be helping the troops in danger today in Afghanistan. And the Army can't say when, if ever, some of this gear might make it to the battlefield.