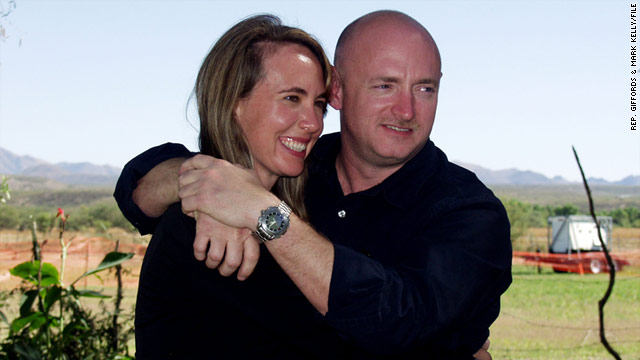 U.S. Rep. Gabrielle Giffords was shot in the head in Arizona in January. Her husband is astronaut Mark Kelly.
STORY HIGHLIGHTS

Friday, the Arizona congresswoman will witness her husband's own inspiring moment: Commanding the space shuttle Endeavour on its last launch.

Doctors have cleared Giffords, who was shot in the brain at a January 8 event in Tucson, to attend the scheduled launch in Florida, a source close to her said Sunday.

The source told CNN Senior Medical Correspondent Elizabeth Cohen that Giffords will be accompanied by a nurse. There will be no doctor or medical assistance on board.

The source was not sure what kind of plane Giffords will be going on, but it will not be a commercial airliner. "She'll probably be going either Wednesday or Thursday," the source said.

Asked by "The CBS Evening News With Katie Couric" what Giffords' reaction was to the decision allowing her to go, Kelly replied, "I think she said, 'awesome' and she pumped her fist."

Kelly's comments on the flight and his wife's recovery will be broadcast on CBS Monday evening. The network Sunday released excerpts of the conversation.

Giffords, who is recovering at TIRR Memorial Hermann hospital in Houston, won't meet with the media or make a statement while she is at Kennedy Space Center in Florida for the 36th shuttle mission to the International Space Station.

Doctors and friends have spoken of Giffords' strong recovery. She speaks in short sentences, walks with a cart for therapy and has full use of her left side.

Kelly told CBS that Giffords' "personality's a hundred percent there. You know, it's difficult for her to walk. The communication skills are difficult, at this point."

Democratic Rep. Debbie Wasserman-Schultz of Florida, one of those present at the hospital when Giffords first opened her eyes after surgery, recently said her friend "continues to make remarkable progress, has a little bit more mobility now ... is a lot more responsive, interactive and initiating speech."

"I'll tell you she's not going to be 100%, I know that for a fact. She has a scar on her head, she's going to have multiple scars on her. And what you see on the outside is also reflective of what goes on inside underneath it as well," said Rhee. "So while we cover it up, there are a lot of things that are permanently damaged that won't ever come back. Is she going to be the same as she was before? I think she's going to have permanent changes in thoughts and memories and feelings and emotions, so we'll have to see how that pans out in the future . But I think she'll be doing very well."

Kelly will be commanding a crew of four other Americans and one astronaut from the European Space Agency. Liftoff is scheduled for 3:47 p.m. ET Friday.

According to a senior administration official, President Barack Obama and first lady Michelle Obama and their daughters Malia and Sasha also will watch the launch in person.