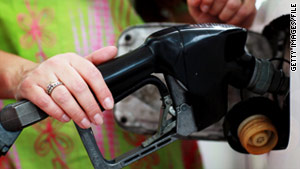 The average price for a gallon of gas is particularly painful in Chicago -- $4.27.
STORY HIGHLIGHTS

Los Angeles (CNN) -- Gas prices jumped more than 11 cents over the past two weeks, but the pace of higher pump prices has slowed and they may have peaked, according to a survey published Sunday.

The average price of a gallon of self-serve regular is $3.88 in the United States, not including Alaska and Hawaii, the Lundberg Survey found. The previous survey three weeks ago found an average of $3.76.

The average gallon is just 23 cents off the all-time high of $4.11 set in July 2008, but weakening demand for gasoline and a slower rate of rise in crude oil prices may keep it from hitting that mark, said publisher Trilby Lundberg.

"It is by no means assured that prices will continue rising to reach that level," Lundberg said. "In fact, prices may peak well before the summer driving season. They may even be peaked right now."

Crude prices have been affected by the civil war in Libya, increased demand in developing nations and the weakening dollar, she said.

Gasoline has risen 70 cents a gallon since February 18 and $1.19 in the past seven months, she said.

The recent gas prices rises have been "a catch up from earlier rises in crude, but crude oil has lost steam," Lundberg said.

Here are the average prices in some other cities: