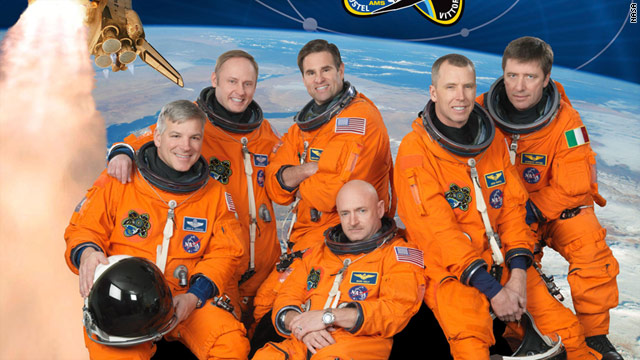 Are you there to see the shuttle launch? Share photos, video

Kennedy Space Center, Florida (CNN) -- For Space Shuttle Endeavour Commander Mark Kelly, there was wonderful news leading up to the launch. His wife, U.S. Rep. Gabrielle Giffords, is there to watch the lift off.

A bullet tore through the Arizona congresswoman's head, nearly taking her life, less than four months ago.

After the shooting at Giffords' town hall meeting, it was uncertain whether Kelly would stay on to command the mission. This bittersweet love story has seen Kelly continue training while spending nearly every evening at his wife's side.

A few months ago, before his wife's shooting, Kelly talked about his upcoming mission.

"Flying in space is a very difficult thing to give up," Kelly said. "I remember after my last flight thinking 'Well, maybe this is the last time I'm gonna do this.' And, you know, you go a couple of months out and you're like, 'Oh, I really hope this is not the end of my flying career.'"

Kelly said that when STS 134, the Endeavour's last flight, is over, "I'll be thinking the same thing, I can't really give this up. I've got to figure out a way to get back into space."

As the space shuttle program winds down with the last launch, the Atlantis, set for this summer, many in the astronaut corps are wrestling with what they'll do next. Russian rockets will be the only way for American astronauts to get to space for the foreseeable future.

Endeavour mission specialist Mike Fincke spent a total of a year in space on the international space station, getting there and back twice on Russian rockets, but this will be is his first shuttle flight.

"I think all of us, with all the changes that are going on with our country's space program and NASA, all of us professional astronauts are looking into our hearts to see what we're going to do next," Fincke said.

"I believe in what we are doing," he said. "It's pretty amazing, taking people off the planet Earth and hopefully exploring the solar system."

When mission specialist Drew Feustel goes into space on the Endeavour, it will be his second shuttle flight. He helped repair the Hubble Space Telescope on his first trip into orbit.

Growing up in Detroit with a father and uncle who were mechanics served him well, Feustel said.

"I started at an early age with motorcycles and bicycles and then eventually bought my first car before I was old enough to drive it, and took it apart in my garage," he said. "There's at least one or two projects in the garage."

He was hoping to get them done before this flight, but at last check there was still work to do.

He'll have a lot of work to do on this mission, with four spacewalks planned. These walks will get the space station ready for the time when shuttle crews can't get there. The spacewalkers will retrieve experiments, install new ones, refill tanks and lubricate parts.

Endeavour's cargo bay will carry the Alpha Magnetic Spectrometer. At a cost of $1.5 billion, it is the most expensive piece of equipment a space shuttle has ever carried.

The AMS is designed to capture space particles, like anti-matter and dark matter, which scientists know very little about. The AMS will be mounted outside the space station. Scientists hope it will lead to a better understanding of how the universe began and evolved.

The two-week mission will be the end of the space road for Endeavour, built to replace the shuttle Challenger, which was lost with its crew in an explosion during ascent in 1986.

Since Endeavour's first mission in 1992, it has flown numerous space-station construction missions and the first Hubble servicing mission.

Endeavour and the other orbiters have been remarkable flying machines, pilot Gregory Johnson said.

"We have put satellites up into orbit," Johnson said. "We have done mapping of the whole topography of the Earth. We have taken up the Hubble Telescope and serviced it several times. And we've built this huge space station. The vehicle has done its job."

NASA recently announced that when Endeavour returns it will be made ready for its final journey to a permanent home, on display at the California Science Center in Los Angeles.

The president met Friday with shooting victim Rep. Gabrielle Giffords, who's awaiting Endeavour's launch with her astronaut husband.
Space shuttle: What have we learned?

NASA's shuttle program accomplished a tremendous amount, but in some ways it fell short of its original purpose.
NASA: No Endeavour launch Monday

A plan to launch the space shuttle Endeavour on Monday has been scrubbed, officials said Sunday.
History on their minds

As Endeavour takes on its final mission, the man who commanded the spacecraft's maiden flight in '92 is nostalgic and hopeful.
Munchies for space

Astronauts eat pretty well up there: links and eggs, chicken and mashed potatoes, apples and candy bars. But there's a catch.
Astronauts unsure of future

For Endeavour's commander Mark Kelly, there was good news.