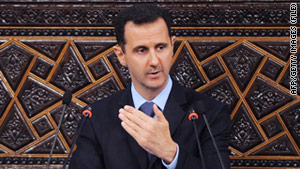 Washington (CNN) -- The U.S. government announced Friday that it has imposed new sanctions against top members and elements of the Syrian regime of Bashar al-Assad responsible for overseeing the recent violent crackdown against protesters.

The sanctions -- imposed on Assad's brother, among others -- involve an asset freeze and a prohibition on doing business in the United States.

Mahir al-Assad, a brigade commander in the Syrian Army, has played a key role in the regime's actions in the southern city of Daraa, a flashpoint for the protests.

Syria's intelligence director and a cousin of Assad responsible for security around Daraa were also hit with the sanctions.

"I have determined that the Government of Syria's human rights abuses, including those related to the repression of the people in Syria ... constitute an unusual and extraordinary threat to the national security, foreign policy, and economy of the United States," President Barack Obama said in a letter to House Speaker John Boehner, R-Ohio.

The increasingly bloody crackdown orchestrated by Damascus resulted in at least another 22 deaths Friday, witnesses said.

Jacob Sullivan, the State Department's director of policy planning, told reporters that the individuals targeted by the sanctions are "key decision-makers" and "key perpetrators" in the crackdown. It "does sharpen the choice for the Syrian leadership," he said.

President Assad himself was not targeted by the sanctions, but "don't think (he's) not on our radar," an administration official told CNN. Don't think "that if these abuses continue we won't act against him."

"We have (the) flexibility to add additional designations," Sullivan stressed.

Last week, the White House released a statement by Obama condemning "in the strongest possible terms the use of force by the Syrian government against demonstrators."

Until Friday, the administration had taken a more muted response to the crackdown in Syria out of fear of destabilizing the Assad regime. Officials have voiced concern about possible sectarian tensions if Assad's Alawite minority government is overthrown, and have expressed little confidence in Syria's fragmented opposition.

Washington has also been under pressure from Israel and allies in the Persian Gulf such as Saudi Arabia and the United Arab Emirates, who fear Assad's departure could produce a more radical Syria and encourage further revolutions, officials said.

At the same time, however, a number of U.S. officials and Western diplomats have described Assad's regime as increasingly brittle, and are predicting it may be hard for Assad to survive.

The United States has less leverage in Syria than it does in other countries. The Bush administration already imposed strict sanctions against Damascus in 2004, including a ban on almost all trade between the two countries. It is unclear how effective the new round of sanctions will be.

The administration appears to have ruled out the use of any military force -- a stark contrast to the recent course of action in Libya.

"Syria is a different country (than Libya). It's in a different place," Joint Chiefs of Staff Chairman Adm. Mike Mullen said Thursday. "While we certainly abhor the violence and abhor the killing, I think we have to be very mindful of the uniqueness of Syria in both its history, its location, and what the potential is."

Obama administration officials had hoped Assad, unlike his father, would prove to be a reformer. Those hopes now appear to be waning.

"We are worried he is dropping all pretenses of reform and carrots and sticks, and is going to go out hard with all sticks," one official said recently. "We are expecting him to increase the crackdown."