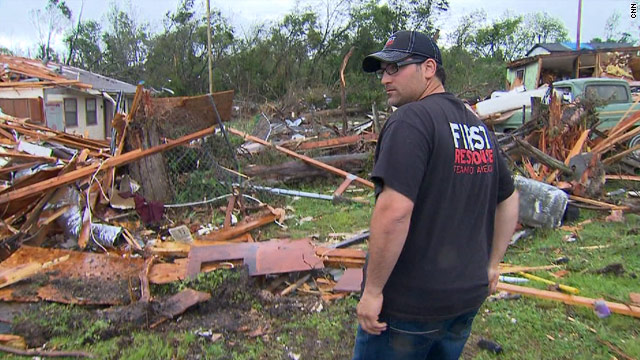 (CNN) -- Last week's tornado outbreak was the largest in U.S. history, according to the National Weather Service. At least 178 tornadoes tore across communities in 14 states and caused 327 deaths.

Among the communities affected by the storms was Ringgold, a small town in northwest Georgia. Half of the town's businesses were damaged, and many homes were reduced to rubble.

Ringgold, population 2,800, had limited resources to deal with the emergency until 2008 CNN Hero Tad Agoglia and his First Response Team rolled into town.

With more than $1 million worth of specialized equipment, Agoglia's mobile response team has the tools and the experience to help communities recover in their darkest hours.

CNN spoke to Agoglia about his group's recent efforts in Ringgold.

CNN: Where were you when you heard about the storms, and why did you decide to come to Ringgold?

Tad Agoglia: (We) had been in North Carolina for the past two weeks. We responded to a terrible tornado there that ripped through most of the state. All of a sudden, we're watching on TV one of the worst (tornado outbreaks) form in United States history, possibly.

We knew there was going to be a tremendous amount of suffering, and we knew we had to respond. We decided to come to Ringgold, Georgia, because it's a small community, and most likely they didn't have resources they would need to deal with this type of storm.

CNN: What kind of resources do you bring with you?

Agoglia: When a disaster strikes, you don't really know what you're going to need, so you have to bring everything. That's why we've packaged up four tractor-trailers loaded with just about every type of tool and gear and piece of equipment.

We have huge lighting systems and rubble cameras for search and rescue. We've got cranes and trucks to remove the debris from the road. We've got the (generators) to power up emergency rooms, nursing homes, shelters. We've got just about every type of cutting tool known to mankind -- plasmas cutters, concrete saws, metal saws, wood saws -- anything that you need to get through an area to get to the people that need help.

We have seen just about every type and size of disaster imaginable. We can create a lot of progress really quickly in a lot of communities just by the experience we have and the equipment we have.

CNN: What have you been doing since you arrived in Ringgold?

Agoglia: We were able to get the church powered up and utilize it as a shelter. After that, we quickly moved in gear to start clearing roadways.

Clearing roads is really important, because people can't get out if the roads aren't cleared. Ambulances and fire trucks need to get to home sites to perform search and rescue, so we help with that.

This debris is really tricky stuff to deal with. When you look at a road and it's covered with houses and trees and cars -- just about anything you can imagine -- it's a little challenging to figure out how to clear that path. But we've got the equipment to be able to do that. So we just began to clear one road after the other.

CNN: You've also been clearing home sites. How do you decide who to help?

Agoglia: It was a little difficult to figure out where to start. It's just home after home, hundreds of them for miles and miles throughout this county and city. And so we decided to start helping families who lost loved ones in the storm.

I literally just started walking up the streets. I started asking questions. "Do you know anybody that's in need? Do you know any families that have lost loved ones?" And the local community led me to Melba (Weese, whose father was killed).

Not only were we able to go through the home site (where Weese's father lived) and find some of their precious belongings and clear the site, but we were also able to prepare the burial grounds for her and her family.

CNN: This work is so physically and emotionally grueling. What keeps you going?

Agoglia: This is part of being human. A lot of people think the government is supposed to help us or FEMA's supposed to help us, the White House in Washington will help us. But when we see people who are really suffering and struggling, it's our responsibility to come and to help.

I'll come into a city, and I'll meet absolute strangers. And within days, they're kind of like friends and family. And it's hard when you look into their faces and you see the sadness and the loss, the shock and confusion. And all I can hope is that what we did makes a difference in their lives ... and hopefully others will also rise to the occasion, see the needs and do something about it.

To donate to the First Response Team, visit its website at firstresponseteam.org. To read the original story about Agoglia, visit his archive page at CNNHeroes.com.

CNN's Kathleen Toner and Ashauntae Porras contributed to this report.