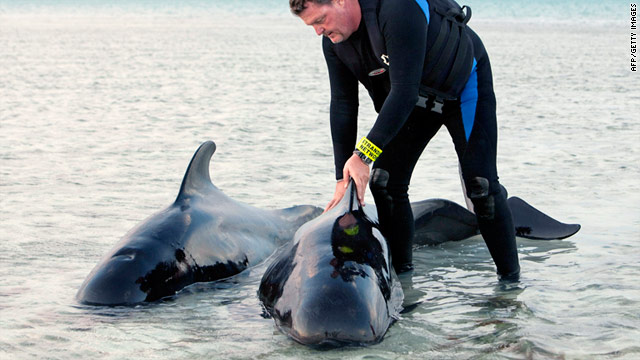 Miami (CNN) -- Rescuers worked feverishly Friday to save some of the pilot whales who stranded themselves in shallow waters near the Florida Keys.

At least 21 pilot whales were found in an area about 20 miles north of Key West, according to officials with the National Oceanic and Atmospheric Administration.

Officials said 13 whales are dead and the count might climb.

Several others were being treated at a holding pen at a marina in Cudjoe Key, Florida, they said.

"It's a way to control the situation and to serve as protection for the volunteers and for the animals," said Karrie Carnes, a NOAA spokeswoman with the Florida Keys National Marine Sanctuary.

By about 4 a.m. Friday a team of about 50 people were able to get six of the whales into the safer area and were protecting them with a sea pen they had created, said Art Cooper, vice chairman of the Marine Mammal Conservancy.

Officials said If any of the whales are healthy enough to be released, that will happen sometime Saturday. They will be loaded onto a boat and taken far out to sea for release. Others may be taken to rehab facility in Key Largo.

The whales were spread out in about a four-mile area in waters that were as shallow as three inches in some areas.

The situation for the animals was dire because mass strandings can be a sign of some kind of sickness in some of the whales, Cooper said. Also, being stuck in shallow waters makes them vulnerable to predators.

"It is a bad situation for them when they get in the shallows and thrash around and bloody themselves," Cooper said. "If there is nobody to intervene for them they will die."

Carnes also said the whales are in a perilous situation.

"It is highly likely that these animals are emaciated, that they are compromised," she said.

Wet sheets were placed over the whale's bodies in an effort to block the sun and cool them.

"These animals don't spend a lot of time in the sun or in the shallow water, so overheating is a concern," said NOAA Fisheries official Erin Fougeres.

At least one of the whales could be in respiratory arrest, "but we don't know if that's the reason or if the other animals followed them in," Fougeres said.

Officials say that determining the exact number of whales stranded is difficult because of the tides.

Officials say it is not yet clear why the whales stranded themselves.

A similar incident occurred in the Florida Keys in 2003, when 28 whales were stranded. Most of them died, but after several months of care, five were released back into the ocean.

Carnes told CNN that workers will determine the pilot whales' health and hope to transfer them to a rehabilitation facility in Key Largo.

Last year, dozens of pilot whales died in northern New Zealand after 58 of them were stranded on a remote beach.