Study looks at whether college is really worth the price 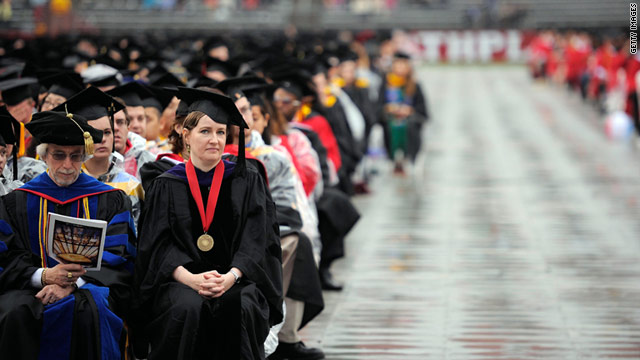 Americans' perceptions of how a college degree affects their average paycheck is correct, a recent Pew study found.
STORY HIGHLIGHTS

" examines the crisis in our public education system and why America's financial future is at risk if our students can't excel math and science. It airs at 8 p.m. ET May 21 on CNN.

Washington (CNN) -- The perceptions Americans have of how a college degree will affect their average paycheck over a lifetime appear to be close to correct.

Census data from 2010 shows that the median gap in earnings between those with only a high school diploma and those who have a college degree is $19,550.

"We find that for the typical person there's about a $550,000 advantage to going to college in lifetime earnings," said Paul Taylor, one of the study's authors.

The study points out that the student's field of study, among other factors, can also influence income. For example, a college graduate can choose a career that doesn't come with a high salary and some people with just a high school diploma can earn a lot of money.

How to fix U.S. education system

President Barack Obama clearly believes that a college degree is worth it for most Americans. He has set a goal of having the largest number of college graduates in the United States as compared to other countries by the year 2020.

"People are clearly struggling with the high costs of college," Taylor said.

Three-quarters of those surveyed said college is no longer affordable for most Americans, according to the study. Yet, for those who are college graduates, 86% said college was a good investment for them personally.

Although the study found that most adults believe a college education is needed to succeed in the world, they listed a good work ethic and knowing how to get along with people as more important to success.

"You have a public that understands that college is important," Taylor said. "But at the end of the day, if you push them and ask is it college or character, people place more importance on character than a college diploma."

As compared to those who only graduated high school, college graduates did tend to be more satisfied with their work life and they found their work to be more interesting.