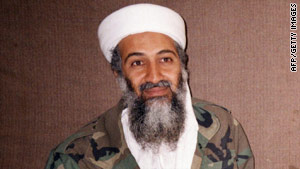 An official says a search of Osama bin Laden's hideout in Pakistan found that he was involved in planning attacks.
STORY HIGHLIGHTS

Washington (CNN) -- Materials taken from Osama bin Laden's compound in Pakistan confirm that the al Qaeda leader communicated with the Yemen-based group al Qaeda in the Arabian Peninsula, according to a U.S. official familiar with the ongoing U.S. analysis of the documents.

It is not clear whether that group ever received the communications or if it acted upon them, said the official, who could not be named due to the sensitivity of the intelligence information.

The United States is still trying to determine if the leader of al Qaeda in the Arabian Peninsula, American-born Yemeni cleric Anwar al-Awlaki, was in direct communication with bin Laden. Washington considers the Yemen-based group a very active wing of al Qaeda. Several attempted bombing plots targeting the United States -- including the unsuccessful Times Square bombing of 2010 and the attempt to blow up courier planes with explosives hidden in printer cartridges -- were hatched in Yemen.

The search through bin Laden's materials, which were recovered after the al Qaeda leader was killed in a May 2 raid on his compound by U.S. Navy SEALs, has also found direct evidence that while in hiding in Pakistan, bin Laden was involved in planning attacks. The materials confirmed that bin Laden was encouraging direct plots to attack Americans and U.S. interests in Europe late last year, according to the U.S. official.

The source emphasized there were several threats at the time that led the United States to issue an October 2010 alert for Americans traveling in Europe.

Bin Laden was "aware, supportive and trying to motivate his operatives in Europe. He was pushing them," the source said.

What's next after bin Laden's death?

The U.S. intelligence community had classified information at the time suggesting that bin Laden was involved, the U.S. official said, but the documents taken from the compound have provided confirmation. Officials have previously said bin Laden always placed a top priority on trying to attack Americans.

While officials are still trying to assess overall how effective bin Laden was in communicating with his operatives in Pakistan and abroad, the threats that emerged late last year came from "al Qaeda Central," the source said, using the phrase that refers to bin Laden and his direct associates.

"Absolutely, he knew" about the plotting to attack in Europe, the official said. "Osama bin Laden was in the loop."