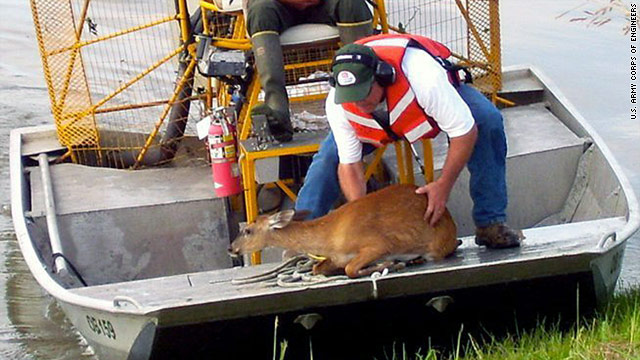 (CNN) -- Please don't feed the animals. Or touch them. Or do anything to keep them from crossing levees to escape rising floodwaters.

At a time they are already under stress, deer, bear, turkeys and other animals don't need any interference from humans, wildlife officials said Tuesday.

Across woodlands near the Mississippi and other large rivers, wildlife is on the move. Louisiana has reported deer drownings and Mississippi officials are worried about a spike in deer-vehicle collisions.

Much of the focus is on the Atchafalaya Basin in south-central Louisiana. Over the weekend, the Morganza Spillway was opened, easing the crisis in Baton Rouge and New Orleans, but ensuring millions of gallons of water will flood communities in the basin.

Four black bears have been seen on the move in the Morganza area, said Christina Stephens, a spokeswoman for the governor's Office of Homeland Security and Emergency Preparedness. "We've received lots of wildlife sightings."

The Morganza Spillway was last opened in 1973. Lessons have been learned since, said Kenny Ribbeck, chief of the wildlife division with the Louisiana Department of Wildlife and Fisheries.

The U.S. Army Corps of Engineers is releasing water at a slower rate this time, he told CNN.

"This allows wildlife to move slowly and get out of harm's way," Ribbeck said.

Still, the animal exodus to higher ground will intensify this week when the rising floodwaters move from largely farmland to the woodlands. Birds and certain smaller mammals such as rabbits and raccoons will usually go high to live in trees or on drift piles, but larger mammals have to clear out, according to Ribbeck.

The state's strategy is to generally allow animals to find their own way.

In 1973, would-be rescuers added to the animals' stress level, making it more difficult for them to survive, according to Ribbeck.

"We won't go out in pursuit of stranded animals," he said.

Already, people have congregated at levees to take photos and view the animals. Some deer panicked and either became entangled in obstructions or ran out of strength, with drowning the result, the official said.

Officials usually advise residents to not touch, assist or distract animals. Feeding them often turns them into nuisance animals.

"We're going to see more animals hit the levees, trying to get out of there," Ribbeck said. He also cautioned individuals against trying to rescue wildlife.

A network of wildlife rehabilitation volunteers in Louisiana has been called in to assist injured and sick animals, and orphaned juveniles, with the aim of getting them healthy enough to return to the wild.

A couple volunteers had the opportunity to work with the U.S. Fish and Wildlife Service to save bird nests about to be lost to rising waters or alligators.

"It's amazing to be able to save them," Ransonet said. "We don't usually mess with Mother Nature, but they needed the help."

Rehabilitators will be careful to use covered cages and gloved hands so that the osprey don't form too close of a human bond.

The chicks will be sent to a facility in Lake Charles, where a surrogate bird will help "teach them their natural habits" so that they can eventually be returned to the wild, Ransonet said.

"We have reports of deer foaming at the mouth and panting as they cross bodies of water," said Gast. "The animals are stressed right now. They are going without food."

Officials also are concerned about the Louisiana black bear, which is the subject of a recovery effort in much of the state.

"These cubs are not going to have the duration to swim a great distance," Ribbeck said.

State officials will intervene if there is a human-bear situation, with the aim of frightening the bear away or capturing it.

Feral hogs, considered an "outlaw quadruped," will largely catch a break. Normally, it's open season on the animals, but the state doesn't want to create too much of a disturbance for other species.

Upstream, in Natchez, Mississippi, volunteers Tuesday were assisting animals of the domestic kind.

A temporary shelter had about 70 pets, with room for that number to grow to 170 and possibly 300, as homeowners brought them as they dealt with rising floodwaters.

"We have animals trickling in very slowly," said Rowdy Shaw, a senior field responder on the Humane Society of the United States' animal rescue team. "We're here on a pre-emptive strike."

Shaw, who is working with the Adams County Sheriff's Office, expected about 95% of the cats and dogs to be returned to their owners when the crisis passes. The society can help with pet search and rescue if called upon.

Back in Louisiana, Ribbeck said the displacement of animals could last until July. But he's optimistic most will find their way home.

"They have a strong demand to return to home range, he said.

Residents across the region, including farmer Michael Oxner of Bald Knob, Arkansas, have seen snakes slink to higher ground.

Louisiana officials Tuesday issued advice to residents in flood-impacted areas on how to prevent snake encounters and bites.

Of the 22 species within the Morganza Spillway, three -- the copperhead, cottonmouth and canebrake rattler -- are venomous.

"When you come back to your home, check for snakes," said Stephens of the homeland department.