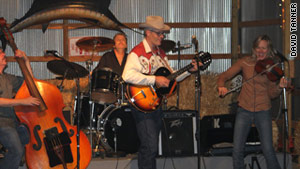 Musician, former lawyer and atheist David Tanner is the only resident of the community once called Rapture, Indiana.
STORY HIGHLIGHTS

(CNN) -- If the Day of Judgment begins Saturday, as an apocalyptic Christian radio network has predicted, the community of Rapture, Indiana, will likely take it in stride.

Perhaps that's because the souls who lived in 15 to 20 homes in the southwest corner of the state are long gone -- leaving only one family and the name Rapture on online maps.

Curious about its history, CNN called area post offices, the town hall in nearby Poseyville and the local library. Nobody had heard of Rapture, much less knew how it got its name.

But they did know of Bugtown, as the tiny community on Highway 68 is now known.

Heather Gallagher, director of Poseyville Carnegie Public Library, did a little digging and suggested a call to Bugtown's sole resident, who splits his time between Indiana and Nashville.

David Tanner gave up his law practice and moved to Nashville, where he plays upright bass and sings in groups Spaghetti Westerneers and Brazilbilly.

Doomsday prophecy: What if he's right?

Ready for end of the world?
RELATED TOPICS

He owns a home, rental property and an airplane hangar in Bugtown.

"The rest is grass," said Tanner.

An atheist, Tanner is not fretting about Family Radio founder Harold Camping's prediction that Jesus Christ will return during the world's destruction and ascend into heaven with true believers.

I'm not concerned if the world doesn't end and it's all a hoax," Tanner said from Nashville Friday. "If it does (end), I've had a great time living to 46."

In nearby Griffin, Guy Carner, 77, said he is familiar with Bugtown. "It's a dot in the road."

He, too, was philosophical about Saturday's predicted Rapture.

"I think the Bible says you never know when it will happen."

Tanner, whose Indiana home is 150 years old, said old-timers at some point began referring to Rapture as Bugtown.

"We'll never know exactly where the name came from," he said of Rapture.

He does have a idea on why the area is called Bugtown.

"She said there was a lot of bugs," the musician said, quoting his grandmother.

For several years, Tanner has held the Bugtown Jamboree the Sunday before Labor Day. Bluegrass and other musicians play. The event has included a square dance, two parachutists and a helicopter. All for a $10 donation.

Tanner's not sure if he'll pull it together this year.

"It's a lot of beer bottles to pick up."

Saturday, meanwhile, should be pretty quiet in the Indiana farm country, with highs in the low 80s, but scattered thunderstorms in Poseyville are possible.

The Poseyville library is planning to open at 9 a.m.