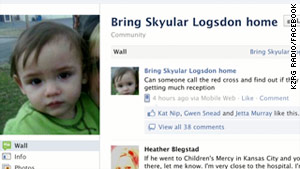 (CNN) -- A panicked Frank Reynolds dialed the number for KZRG on Tuesday morning. The Joplin, Missouri, radio station was the glue that was holding the tornado-devastated community together.

Reynolds' great-nephew, Skyular Logsdon, only 16 months old, was missing after the deadly tornado struck the family home. Reynolds told the station's talk show hosts that Skyular was born prematurely and was small for his age, weighing only 20 pounds.

"When the tornado hit, we lost track of him," Reynolds said, the urgency apparent in his soft-spoken voice.

He gave his number to the radio station, in hopes that someone would call it.

Reynolds was hardly alone. With so many people still missing and so many homes destroyed after Sunday's tragedy, Joplin residents have been relying on their local radio stations for news and information.

KZRG, part of Zimmer Operations' six radio stations -- two that are news and four, music -- began its wall-to-wall coverage an hour and a half before the tornado twisted through town Sunday. It hasn't stopped.

For the first 24 hours, there was no electricity. Both cell phones and land lines were out, as was Internet service. All that people in Joplin had were battery-powered transistors.

The tornado missed the station building by a few blocks. So Zimmer Programming Manager Chad Elliot's staff cranked up the generators and turned off the music. They even canceled the commercials. All they did was provide vital information to people who had lost everything.

Elliot said it was the first time the stations had stopped all else to provide 24/7 information, though he had learned the power of radio two years ago during a jumbo ice storm.

"We've had this situation before, when radio becomes the only way of communication," he said.

Immediately after Sunday's killer tornado, Elliot said emergency crews drove to the station to provide information for broadcast. The station began telling people where to go for medical help. Or what number to dial for information about the missing. Or where they could buy gas or where there was still a Walmart standing.

Elliot said it reminded him of the family members of the victims of the September 11 attacks who held up photographs of their loved ones in hopes they were not under the rubble. Only, he said, there were no pictures in Joplin -- just trembling voices.

One after another, the calls streamed in.

"We had people calling about family members who went to Walmart to pick up a few items, buy something for Sunday dinner and they just didn't come home," Elliot said.

The radio hosts tried to console and comfort even though they, too, had not been spared from tragedy. Elliot said seven of his 30 employees lost their homes. They still reported to work.

"It's tough," said Audie Renee, a host on the Kix 102.5 country music station, whose second-floor apartment was shredded. "We have an obligation that's very difficult."

Surveys have shown that radio is essential during natural disasters. A 2005 study conducted after a succession of hurricanes along Florida and the Gulf Coast the year before found that radio was the top choice for information during a storm.

"When the lights go out, the radios go on," said Bill Rose, senior vice president of media and marketing for Arbitron, the nationwide radio and TV ratings firm that conducted the study.

"Radio has a personal connection with people in their community," Rose said. "That connection is probably tighter in smaller communities like Joplin."

During the storms in St. Louis last month, radio station KMOX moved its coverage of Cardinals baseball to a sister station so it could provide uninterrupted storm coverage. Arbitron numbers showed its listenership spiked more than fourfold.

In Joplin, Elliot plans to continue continuous emergency coverage until Wednesday morning. But even after the music returns, he said, listeners of his radio stations will find news at the top and bottom of the hour.

This crisis, like all others, will eventually fade, he said. "But right now, there is desperation."