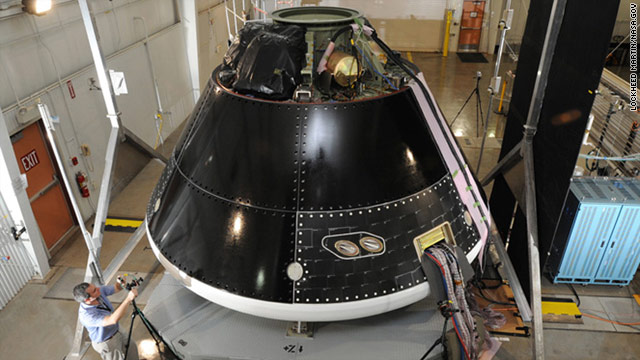 The capsule will carry four astronauts and be based on designs originally planned for NASA's Orion Crew Exploration Vehicle.
STORY HIGHLIGHTS
RELATED TOPICS

Miami (CNN) -- NASA plans a return to yesteryear by developing a space capsule that will carry humans into deep space, it announced Tuesday.

"We are committed to human exploration beyond low-Earth orbit and look forward to developing the next generation of systems to take us there," NASA Administrator Charles Bolden said.

The new spacecraft, to be built by Lockheed Martin, will be known as the Multi-Purpose Crew Vehicle, or MPCV. It will carry four astronauts and be based on designs originally planned for NASA's Orion Crew Exploration Vehicle, whose development was canceled by President Barack Obama.

NASA says astronauts would not fly onboard until at least 2016. NASA has not flown astronauts beyond low-Earth orbit since the Apollo program, in the 1970s.

"We hope to have test flights in this decade. We're not sure when but certainly as early as possible," said Douglas Cooke, NASA's associate administrator for exploration systems mission.

Like the Apollo spacecraft, which landed 12 men on the moon, the MPCV will splash down in the Pacific Ocean upon return to Earth. However, the new craft will be the 21st-century version: Much larger and 10 times safer to launch and land than the space shuttle, NASA says.

"We would have an abort system, all the way from sitting on the pad, to flying up, up and away. The space shuttle has never had that capability," Cooke said.

This new spacecraft is NASA's first step forward in its next great leap, as the U.S. space shuttle program heads into retirement.

The MPCV is currently at Lockheed Martin's facility in Denver, undergoing testing.

NASA is hoping to start flying as soon as possible to close the gap in the U.S. manned space program. With the retirement of the space shuttle, expected in July, the U.S. will have to pay the Russian space agency to take astronauts back and forth from the station until the MPCV is ready.

NASA is also hoping that private, commercial companies will soon be able to fly astronauts to the space station in newly developed vehicles.

The original Orion spacecraft was part of NASA's Constellation program to take man back to the moon, and later, to Mars. That program was canceled.

In 2010, it was resurrected, and downsized to be used as a "lifeboat," in the event of an emergency on the space station. Five billion dollars have already been spent on Orion -- another reason to keep the design.

NASA has not yet developed a rocket powerful enough to propel this spacecraft out of Earth's atmosphere.

"As we aggressively continue our work on a heavy-lift-launch vehicle, we are moving forward with an existing contract to keep development of our new crew vehicle on track," Bolden said.

Obama has committed $3 billion for NASA to develop the heavy-lift-launch vehicle.