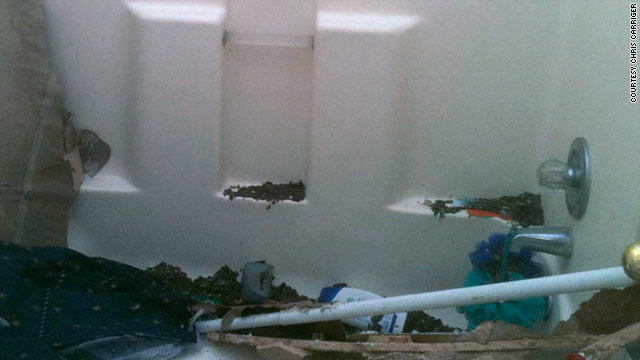 Did you experience the tornado in Joplin, Missouri? Send your photos, videos or stories. Tune in at 8 ET Saturday night for CNN Presents' "A Twister's Fury: In the Path of Destruction." CNN shows you how large parts of Joplin, Missouri, were reduced to rubble in minutes, yet hope remains with amazing stories of survival.

The tornado that struck the community Sunday killed at least 125 people, in what authorities said was the deadliest single U.S. tornado incident since modern record-keeping began 61 years ago.

An estimated 750 people have been treated at area hospitals.

No rescues were conducted and no bodies were found on Wednesday, according to Joplin City Manager Mark Rohr, who refused to comment on the number of people missing in the town. Rohr did, however, ask people who were out of their homes to call city authorities, so that an accurate count of the missing can be made.

Sirens sound in Joplin during broadcast

One Joplin family begins to rebuild

And a tornado touched down in the town of Ellsinore, Missouri, on the other site of the state, according to emergency officials in Carter county. They say five homes were destroyed, but there have been no reports of injuries or fatalities.

The Federal Emergency Management Agency said in a statement that at least six community relations teams were on the ground meeting with survivors in Joplin. So far, they've worked one-on-one with more than 200 people. FEMA is also coordinating with the American Red Cross, Salvation Army, Convoy of Hope and many other volunteer organizations to provide assistance to survivors

Many of those involved in the search for the missing have suffered loss themselves -- like Joplin Police Detective Chris Carriger, whose own home was severely damaged in the storm. He kept himself from being sucked out of the house by keeping a tight grip on a bathtub faucet.

"My feet were being actually pulled in the air," he told CNN's Anderson Cooper.

The cleanup continued as forecasters raised their assessment of Sunday's storm, ranking it at the top of the scale used to rate the intensity of tornadoes.

The National Weather Service has determined the twister packed top winds of more than 200 mph, making it a 5 on the enhanced Fujita scale, said Bill Davis, the meteorologist who reviewed the damage.

Davis said the tornado left "about six miles of total destruction" in its wake. Examinations of some of the buildings destroyed or damaged convinced forecasters to raise the designation, he said.

"It's obviously a huge tragedy for the people of Joplin," said Nate Fairbank in a CNN iReport from the scene. "There will be a good deal of mourning for lost loved ones, and even people who escaped with their lives were often left with little else."

The vastness of the destruction stunned many.

"The damage has been so extensive, completely devastating the city of Joplin," said iReporter Brandon White. "I've personally witnessed the wrath of many hurricanes. This tornado trumps them all."

"I was walking down Main Street. Everything was so razed over, it was disorienting because some of the streets -- you couldn't even tell where you were at," he said. "After living in Joplin all my life, it was like living in the twilight zone."

"The sole function is to reduce the opportunity for people to loot and steal, and we're hoping the folks who live in that area will cooperate with us," he said.

President Barack Obama announced he will visit the region on Sunday.

"We are going to do absolutely everything we can to make sure they recover," he said during a visit to London.

Obama has issued a disaster declaration -- expediting the distribution of federal resources to the area.

About 1,500 people remain unaccounted for. But "when we open up the area and start letting them come back in ... that number of unaccounted for will start to dwindle," Joplin Emergency Management Director Keith Stammer said.

Family searches for Will Norton

What makes a tornado?
RELATED TOPICS

Authorities have encouraged people to use the website safeandwell.org, operated by the Red Cross, for updates on loved ones.

But the Weather Service does say that the Great Tri-State Tornado of 1925, which tore across southeast Missouri, southern Illinois and southwest Indiana, killed 695 people -- "a record for a single tornado."

A 1953 twister in Flint, Michigan, killed 116 people, according to the Weather Service.

With crews still sifting through rubble, the death toll could continue to climb.

Carriger, the Joplin police detective, said that while mood across the community was somber, residents didn't let their hope waver.

"The American spirit's there -- it's strong," he said. "We're going to get through this. We just have to bond together."