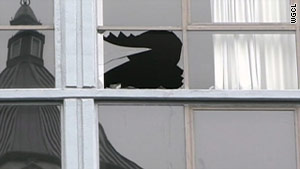 Two women were "play fighting" at an Atlanta hotel when they crashed through a window on Saturday, police said.
STORY HIGHLIGHTS

Atlanta (CNN) -- Authorities were still trying Tuesday to decipher the events that led up to two women falling from a 10th-floor window at an Atlanta hotel during a birthday party early Saturday.

The women, Cierra Williams and LaShawna Threatt, were in a group that had been celebrating Threatt's 30th birthday at the W Hotel's midtown Atlanta location.

According to a preliminary investigation, the pair of friends were "play fighting" when they accidentally crashed through the window around 3:15 a.m., Atlanta police said.

Williams rolled off the sunroof, falling onto the ground below. She remained hospitalized at Grady Memorial Hospital in critical but stable condition Tuesday.

Campos said in a statement officers are not looking at the glass in the hotel windows but are investigating whether there was any criminal activity involved in this incident.

"We are not investigating any aspect of the hotel windows," he said. "At this time, we have no reason to believe this was anything other than a tragic accident."

Police are waiting for toxicology results to see if alcohol played a factor, he said.

"Like everyone, it's hard for us to understand exactly how this happened. In addition to cooperating fully with the police investigation, we are also conducting an internal investigation. At this point, we don't have information to share as it is early in the process," he said in a written statement. "Rest assured, the safety and security of our guests and associates is paramount."

According to the page, Threatt was a model and leaves a daughter behind.