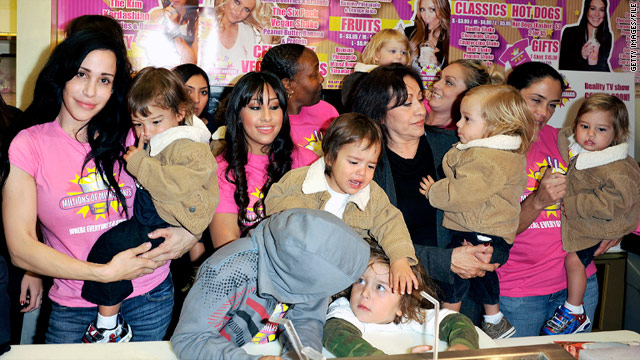 Nadya Suleman, left, launches a signature milkshake at "Millions of Milkshakes" with her family and their helpers in 2010.
STORY HIGHLIGHTS

Los Angeles (CNN) -- The California fertility doctor who implanted a dozen embryos in Nadya Suleman, resulting in the birth of eight babies, will lose his medical license on July 1, state officials said.

The California Medical Board ruled that Dr. Michael Kamrava committed "gross negligence" with "repeated negligent acts, for an excessive number of embryo transfers" into Suleman in 2008.

Suleman -- known in the media as "Octomom" -- was 33 when she gave birth to eight babies in January 2009. She was a single woman who already had six young children conceived through in-vitro fertilization administered by Kamrava.

Kamrava, who began treating Suleman in 1997, said Suleman demanded all 12 embryos that were available for the procedure.

The doctor "did not think he could refuse to transfer less embryos than those to which N.S. would agree because he believe at the time that the ultimate decision should be largely driven by the patient's wishes," the board wrote in the decision released Wednesday.

"While the evidence did not establish (Kamrava) as a maverick or deviant physician, oblivious to standards of care in IVF practices, it certainly demonstrated that he did not exercise sound judgment in the transfer of 12 embryos to patient N.S. (Suleman)," the board wrote.

His lawyer argued during a hearing last October that Kamrava has been "a respected, excellent physician and surgeon for 25 years," but that he "ran into sort of a perfect storm with one of his patients."

Kamrava was also found guilty of gross negligence in two other cases, including his treatment of a woman on her late 40s who became pregnant with quadruplets after he implanted seven embryos. Her pregnancy was "rocked with complications," according to the medical board.

Another case was a missed cancer diagnosis for a patient with an abnormal lab report.

It was revealed during Kamrava's revocation hearing last October that Suleman still has 29 frozen embryos in storage available for her use should she want more children.

The complaint said the doctor should have referred Suleman to a mental health physician after she repeatedly returned to him for treatments shortly after each of her pregnancies.

Kamrava, an obstetrician/gynecologist in Beverly Hills, California, was expelled from the American Society for Reproductive Medicine in 2009 for what the fertility medical society called "a pattern of behavior that violated the group's standards."

The society recommends implanting no more than two embryos for women under 35 and no more than five for women over 40 -- who have more trouble getting pregnant -- according to guidelines published on its website.

Giving birth to extreme multiples comes with tremendous risks for the mother and the babies, including "complications with pregnancy, prematurity and long-term consequences of that," Dr. Victor Fujimoto, an expert witness called by the medical board, testified.

While there has been no indication any problems have emerged, "we still don't know," Fujimoto said.