What Charlotte learned 'when the world flipped' 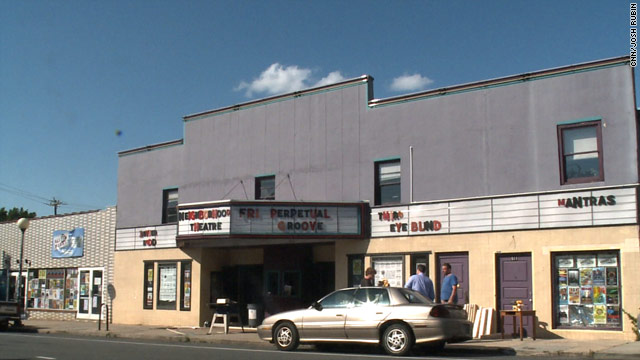 Editor's note: This summer, CNN's Defining America project will be traveling the country with the CNN Express to explore the stories behind the data and demographics. This week, CNN brings you coverage from North Carolina.

Charlotte, North Carolina (CNN) -- When residents of the city nicknamed "Banktown" talk about the whipsaw economic changes of the past decade, they often refer to "before" and "after."

The "before" was Charlotte in 2007. The No. 2 banking capital outside Wall Street was flush with money from the nation's real estate spending spree.

The mood was as high as the city's sparkling new skyline. Recently constructed skyscrapers,costing hundreds of billions of dollars vaulted from the city's center. Charlotteans were thrilled to be awash in the mortgage industry's free-flowing cash.

North Carolina: By the numbers

With unemployment at a minuscule 4.2%, the city had engineered a light rail public transit line, a modern public transportation center and a multi-million dollar indoor sports arena. Restaurants and retail moved in. Museums built new spaces .The plan was to transform the city into a savvy center of the modern South.

Then there's the "after."

Wall Street bailouts, buyouts, and bankruptcies were hastily negotiated in Washington and had a quick impact here.

At the grocery store, the coffee shop, on the street, people with jobs describe themselves as "blessed." Residents still seem stunned when they compare the town now to its former go-go economy.

"It just absolutely knocked our socks off," Law said. "People started losing jobs. People's credit was over extended. People were scared of what was going to happen, and a lot of things just sort of stopped." 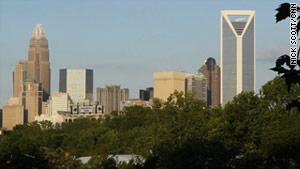 What happened between before and after was "when the world flipped."

The city with so many plans saw many of them dashed. For the first time in years, the city was forced to catch its breath and look at how it had changed.

Since the smackdown of the 2008 financial crisis, the city has been humbled. It's more cautious, but wiser, business leaders said.

In the "after," Charlotteans native and new learned hard lessons about how life can change instantly, how to adapt, and how to rethink the future for their boom town.

For most, the situation was unprecedented. It demanded a grave choice: pack it up or get creative.

Its colorful murals, glowing neon signs and al fresco dining became a Charlotte cultural experience. The buzz around the corner of North Davidson and 36th Street got so loud that the locals gave it a new name:NoDa.

In 1997, local developers refurbished a 1940s movie house to create The Neighborhood Theatre, which quickly established itself as a community anchor. Visitors saw an eclectic range of acts from the latest newgrass band to funkmaster George Clinton.

But when the hammer fell, people stopped going out, triggering the shutdown of restaurants and clubs. Attendance at Neighborhood Theatre sunk.

"We almost had to shut down," co-owner Gary Leonhardt said.

"It was pretty devastating," said Phil Rossi, marketing director. "No one was safe in any industry because ... in every industry it had an effect."

So, the theater lowered ticket prices, increased promotions and put out a plea for community support on local TV and Facebook.

Six months and 7,000 Facebook "likes" later, audiences had increased at least 40 percent, Leonhardt said. It was Charlotte residents, he said, who really saved the theater from going under.

Since then, unemployment crept down to 10.3% in April and economic tensions feel like they've eased a bit. The economy hasn't yet turned a corner, Leonhardt said, but "things have gotten better."

See inside the theater and hear how it survived

Office workers waiting in line nearby at Amelie's French Bakery say the past two years have prompted them to consider safeguarding their careers. A sales rep says she's starting an online craft business on the side. A lunch diner says she's taking a university class to better understand how to survive the post-recession economy.

NoDa is among a handful of Charlotte areas where business appears to be improving. Community leaders also point to Wilmore, southwest of the city's center, South End and Plaza Midwood, where they see signs of a stronger economic heartbeat.

On a recent Saturday night, a mix of urban hipsters and young professionals came to Plaza Midwood to enjoy a night out and maybe spend some precious cash.

Bathed in shadows from the city's spectacular new skyline, diners wait in line for tapas at Soul Gastrolounge. Downstairs at Twenty-Two, patrons can appreciate local art while imbibing regional microbrews, a low-price PBR or a bottle of Cheerwine, North Carolina's homegrown cherry soda.

But Charlotteans can't call these areas "hot," at least not yet.

Inside a trailer office half a block from the Neighborhood Theatre, a local developer has been offering the surrounding property for sale since 2009. So far, plans to build commercial and residential space around the theater haven't panned out. Even these areas are pocked with empty storefronts and property meant for development.

But while business has slowed, Charlotte has something else going for it: An exploding population.

There's at least one telltale sign of a newcomer in Charlotte: Anybody calling the bustling city center "downtown." To people who know the city, it's "uptown."

It's a verbal misstep that happens a lot.

Charlotte has a population of 731,424, the largest in North Carolina, and has long been known as a city of newcomers. The 2010 Census showed its population has skyrocketed by 35% in 10 years. It's gotten older, and more diverse, with a much higher Latino population.

See North Carolina 'by the numbers'

"Try to find an actual native Charlottean here," said Leonhardt, the theater owner, who moved to Charlotte 12 years ago. "Good luck -- because there's not that many of them around. Most everybody here is transplanted from other places either because of the banking or some other industry that's brought them here."

Economic leaders are keenly aware that jobs are critical to Charlotte's population growth, and with jobs disappearing in the post-bust world, they're worried about how to keep people coming to town.

City leaders hope to capitalize on the population growth, using it to spread optimism about Charlotte's future, and hopefully attracting new jobs.

Business groups are trying to lure companies from larger cities. They push recent successes, like new business and home development in neighborhoods like the South End. They pitch Charlotte's big city attributes -- cultural attractions, public transit -- but the economy makes that harder.

"Transportation development has slowed down," said Tracy Finch Dodson, director of economic development for Charlotte Center City Partners. "In this economy there's not much appetite for it."

Some newcomers were victims of the banking industry purge; they didn't bother to stick around, but left town for jobs elsewhere.

Kevin Mays, an accountant and a native of Long Island, New York, said he's all in. His personal stake in the region is as strong as any homegrown Charlottean.

Or, at least, any suburban Charlottean.

In 2007, Mays bought a home in nearby Union County, the fastest growing county in the state, according to the 2010 Census. Like Mays, many of those residents are native northerners.

"Taxes are lower. Schools are better. We could buy more house for our money," Mays said. "In Charlotte now, they're talking about raising taxes again."

As long as Charlotte's population growth keeps pace with the suburbs, it poses little threat to the city. But as home prices fall so do city tax revenues. Government budgeteers are scrambling. Some are calling for higher taxes. Others are hoping that state or federal tax money can fill the gaps until property values rise again.

And that a different type of business could drive them forward.

The Southern epicenter of the 2008 financial earthquake -- the bustling corner of Trade and Tryon streets -- is surrounded by towering monuments to Wells Fargo, Fifth Third Bank and Bank of America.

When planners first conceived a 54-story skyscraper to be built a few blocks down Tryon, they called it Wachovia Corporate Center.

But when the government stepped in to prevent Wachovia's failure in 2008, California-based Wells Fargo took on the business and the building, and the plan changed.

The city's second-tallest skyscraper was dubbed Duke Energy Center, named for Charlotte's top energy employer. Since then, it has captured a new nickname: The Power Tower.

Many local business leaders wonder if it's a sign of things to come, a nod to an answer to Charlotte's economic troubles. In the "after," it's not a bank, but energy.

Duke has spurred hopes for new jobs and increased revenues by its recent merger with another energy company.

High-profile Duke chief executive Jim Rogers played a major role in snagging the lucrative 2012 Democratic National Convention, which could reward the city with an estimated $150 million in potential economic impact.

Why the DNC is good for Charlotte

But it's been a tumultuous economic tailspin, and few offer predictions about when the city will have the go-go feel of before.

It's hard not to be humbled by the experience of the past two years, Law said. Others say it has made them more cautious about community leadership and more thoughtful about Charlotte's economic strategy.

The city has been at an economic turning point since the financial crisis kicked in, said the Charlotte Observer's Rick Rothacker, who documented Charlotte's marriage with the banking business inhis book, "Banktown."

Making the city less reliant on a handful of huge banks would reduce the pain from another gut-wrenching blow from Wall Street, advocates said.

The city, they say, should have many major employers spread across several industries, perhaps fostering a stronger sense of financial security among regular Charlotteans.

In the "after," perhaps it could open the door for Charlotte to resume its upward economic path as one of the South's most promising cities.

"We put all our eggs in one basket, and that basket dropped," Law said. "I think things are going to turn around, but I think it's going to be a while."