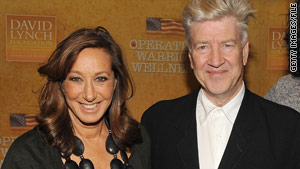 Washington (CNN) -- Celebrities and a medical researcher want to convince the Defense Department this week that meditation could help the increasing number of military personnel suffering from post-traumatic stress.

Star-studded events in New York and Washington are bringing together people experienced in transcendental meditation with soldiers suffering from post-traumatic stress disorder, or PTSD.

Designer Donna Karan hosted a reception in Manhattan on Tuesday evening, and movie director David Lynch ("Blue Velvet," "Mulholland Drive") and CNN anchor and correspondent Candy Crowley will headline a Washington event Wednesday to kick off a campaign the sponsors hope will teach 10,000 veterans how to meditate.

A Georgetown Medical School clinical professor, Dr. Norman Rosenthal, said he has the facts, figures and testimonials to show that meditation can be a low-cost, low-risk alternative to strong narcotics often prescribed by government doctors.

The Pentagon and the Department of Veterans Affairs "are big institutions," Rosenthal said in a telephone interview. "Our hope is someone will raise an eyebrow and say, "Well, well."

He includes case studies in his new book, "Transcendence-healing and Transformation through Transcendental Meditation."

In one case, he quotes a Marine gunner on a Humvee who saw heavy fighting in Iraq. The Marine wrote that PTSD symptoms disrupted his sleep and derailed his family life upon his return to the United States, but "TM (transcendental meditation) has helped with organizing, prioritizing and just being calmer overall. I just feel better."

Rosenthal says a simple seven-step process has quick results. "What do we have to lose? It is so cheap, and it is safe," he told CNN.

The military, meanwhile, is facing a number of challenges over the use of powerful drugs prescribed for a variety of stress-related ailments, with increased risk of sometimes deadly, accidental overdoses. The Army's assistant surgeon general, Brig. Gen. Richard Thomas, told CNN recently that he thinks there has been over-reliance on prescription drugs.

"It reflects how we are in society. We do have a tendency to rely on prescription meds," he said.

And the Pentagon, according to Thomas, is receptive to nondrug treatments.

"Whether it be acupuncture or biofeedback or yoga therapy, there is a host of other things we can provide to patients to take care of them right, other than narcotics," Thomas said at the Pentagon. "Narcotics may still have a role, but it doesn't have as big a role and there are alternatives, and that's the key."

Rosenthal said he and his fellow researchers, who published their findings in the journal Military Medicine, found that meditation can help an individual control emotions and thoughts and deal with common PTSD complaints of anxiety, depression, sleeplessness and anger.

He compares his latest efforts to win government support to his early uphill battle researching and publicizing his findings after he first diagnosed seasonal affective disorder, or SAD.

His research on military PTSD and meditation has a pilot study of five veterans. He brushes aside any suggestions that this is too small a sample.

"When you get a powerful intervention, you see a signal," Rosenthal said. "And how do you get interest without a pilot study?"

His book says of 1.64 million U.S. military personnel sent to the Iraq and Afghanistan war zones between 2001 and 2008, one in seven met criteria for PTSD.

"Half of these veterans had never sought any kind of help for their symptoms, probably because of the stigma of being labeled with a psychiatric disorder," Rosenthal wrote. "Of those who sought help, half received inadequate treatment."