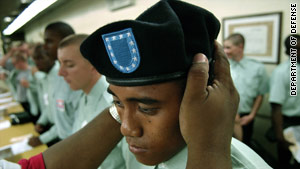 An Army recruit in his third week of basic training is fitted with a beret at Fort Jackson, South Carolina.

Washington (CNN) -- Ten years ago this week, under orders from Gen. Eric Shinseki, then Army Chief of Staff, the black beret became standard gear in the U.S. Army. It was the start of a pitched battle within the Army that would soon find itself fighting two hot wars.

Now, just shy of the anniversary, Gen. Martin Dempsey, the current Army chief of staff, has replaced the black beret with the patrol cap as the default headgear for soldiers wearing Army combat uniforms, what most of us would call their camouflage fatigues.

A patrol cap is like a camouflage baseball cap with a flat top rather than a rounded crown (think Pittsburgh Pirates circa 1979.)

"It's fantastic," one soldier at the Pentagon said when CNN asked about the change.

"Awesome," wrote a soldier on the Army's official Facebook page. "Sanity has prevailed."

For years, soldiers have complained the wool beret was hot, hard to adjust and took two hands to put on. Others said it looked out of place in combination with the uniform soldiers wore when doing their grubbiest work.

But even before Shinseki's order, the idea of having the entire Army wear berets was met with anger by the soldiers already wearing berets, like Special Forces, Airborne troops and especially the Army Rangers.

Special Forces, known better as the Green Berets, considered the beret as a symbol of their becoming members of an elite group of soldiers. As did Airborne troops with their maroon berets and the Rangers who had been wearing black berets since at least 1979.

Many of these elite soldiers felt that having every soldier wear a beret diminished the work and training they'd gone through to earn their berets.

"My initial reaction to the decision to make the black beret the official headgear of the Army was one of anger and disappointment," Retired Army Major Richard Jones wrote in an official Army Internet post about the beret. At first, he tried to have the decision reversed before eventually getting on board.

This latest change means the Special Forces and Airborne troops will keep their green and maroon berets, and the Rangers will stick with the tan berets that they switched to 10 years ago.

If it strikes you that the Army is spending a lot of time and money worrying about hats, well not so. First off, the Army doesn't wear hats, it wears headgear or covers. More importantly, the Army says this move will soon save taxpayers about $6.5 million.

The beret won't go away; it will still be the standard head gear for soldiers wearing their Army Service Uniform (ASU), a dress uniform for more formal events.

Even some of those who opposed wearing the beret in the field posted on Facebook that they liked keeping the beret for those occasions. "Glad you're still holding onto the beret for certain things, looks great with the ASU!" one soldier posted.