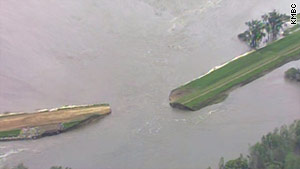 The first breach, which was some 300 feet wide and growing, was a "full breach," the Army Corps of Engineers said in a statement. The break was in Atchison County, Missouri, just south of Hamburg, Iowa, it said.

The National Weather Service warned that flooding could affect Interstate 29 and the town of Hamburg.

"The concern is that anybody ... near the river would see some floodwaters that could impact either their road or homes," said David Pearson with the National Weather Service in Omaha, Nebraska.

She said flooding was affecting farmland.

A breach earlier this month prompted the evacuation of hundreds of people in the Hamburg area as a precaution. No evacuations were immediately recommended or ordered as a result of Monday's breaches, officials said.

However, "people's safety is our number one concern, so we want to stress how important it is for the public to stay off these levees as we continue to assess the risk," said Omaha Corps District Commander Col. Bob Ruch.

The breach near Hamburg was deemed too substantial to repair, said Pearson. "The next step is to attempt to mitigate the flooding with another levee between the one that failed and Hamburg."

State and local emergency management officials were notified, the corps said, and were working with the corps, the National Weather Service and the Federal Emergency Management Agency.

It was too early to determine the cause of the breach near Hamburg, the corps said. But it follows weeks of high flows and record releases from dams in Montana and the Dakotas. Heavy rains and snowpack runoff could result in near-record flooding along parts of the Missouri this year, officials have said.

This year's flooding is putting levees to the test along much of the 1,700 miles of the Missouri. Temporary levees are being built in several locations.