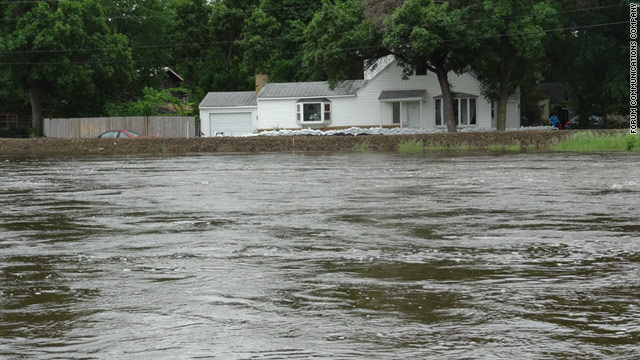 (CNN) -- Authorities have ordered the evacuation of some 12,000 people from the city of Minot, North Dakota, and surrounding areas because of expected record flooding, officials said Tuesday.

The swollen Souris River flows straight through the city and is expected to overwhelm area levees, said Cecily Fong, spokeswoman for the North Dakota Department of Emergency Services. Minot, located in the north central part of the state, is the fourth-largest city in North Dakota.

The evacuation order covers between a quarter and a third of the city's population, Fong said. Residents have until 6 p.m. CT Wednesday to leave their homes.

"We're going to become a pool," Minot Mayor Curt Zimbelman told KXMB-TV in Bismarck. "It's hard to really believe, but I have some real concerns."

The National Weather Service has forecast record flooding and urged anyone living in the affected areas to prepare immediately for oncoming floodwaters. Heavy area rains and dam releases are causing the river to swell at Minot.

"The current best estimate for when water will overtop the lowest dikes in the Minot area is sometime on Thursday afternoon. However, a Wednesday night or early Thursday timeframe cannot be ruled out as the dikes become more stressed due to rising water," the weather service said.