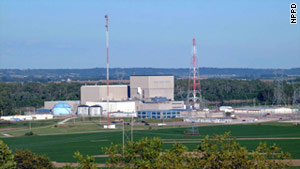 The Cooper Nuclear Station in Nebraska is under an "unusual event declaration" because of floodwaters nearby.
STORY HIGHLIGHTS

(CNN) -- U.S. nuclear regulators say two Nebraska nuclear power plants have protected critical equipment from the rising waters of the Missouri River even though flooding has reached the grounds of one of them.

The Nuclear Regulatory Commission is confident those safeguards will prevent a disaster at either plant even though the Missouri is expected to remain flooded for several weeks, NRC spokesman Victor Dricks said Thursday.

The Fort Calhoun plant, about 20 miles north of Omaha, was shut down for refueling in April. Parts of the grounds are already under two feet of water as the swollen Missouri overflows its banks. But the Omaha Public Power District, which owns the plant, has built flood walls around the reactor, transformers and the plant's electrical switchyard, the NRC said.

"They've surrounded all the vital equipment with berms," Dricks said.

An 8-foot-tall, water-filled berm, 16 feet wide at its base, surrounds the reactor containment structure and auxiliary buildings, the NRC says. The plant has brought in an additional emergency diesel generator, water pumps, sandbags and firefighting equipment as well, according to regulators.

Dricks said the NRC has sent additional inspectors to Fort Calhoun, which declared an "unusual event" -- the lowest level of alert -- on June 6 due to rising water. Six inspectors are now monitoring conditions there around the clock, Dricks said.

The Cooper Nuclear Station, about 80 miles south of Omaha, remains operating at full power. The plant issued an unusual event declaration on Sunday as water levels rose, but the current level is two feet below the plant's elevation, Dricks said.

The NRC will dispatch additional inspectors to the plant "if conditions warrant," Dricks said.

Heavy rainfall in Montana and North Dakota, combined with melting snow from the Rocky Mountains, have sent the Missouri urging downstream this summer. The river washed over and punched through levees in nearby northwestern Missouri over the weekend, spurring authorities to urge about 250 nearby residents to leave their homes.

The 6 to 12 inches of rainfall in the upper Missouri basin in the past few weeks is nearly a normal year's worth, and runoff from the mountain snowpack is 140% of normal, according to weather forecasters.

And CNN affiliate KETV reported Wednesday that, as a precautionary move, the Cooper facility is keeping dozens of staff members onsite around the clock. The station reported that about 60 people are sleeping on cots at the plant and that the staffers are being rotated out every two days.

It was catastrophic flooding from Japan's March 11 tsunami that knocked out cooling systems at the Fukushima Daiichi nuclear power plant, resulting in three reactors melting down and producing the worst nuclear disaster since Chernobyl. This year's Midwestern flooding has also led to a spate of rumors about the Fort Calhoun plant that Omaha Public Power and the NRC have been trying to knock down.

The utility has set up a "flood rumor control" page to reassure the public that there has been no release of radioactivity from the plant. An electrical fire June 7 did knock out cooling to its spent fuel storage pool for about 90 minutes, but the coolant water did not reach a boiling point before backup pumps went into service, it said.

"People are getting scared by a lot of the misinformation," Dricks said. "It's primarily coming from Internet bloggers rather than the mainstream media. None of them have bothered to check with us."