Dozens of homes evacuated as fire rages in Oklahoma 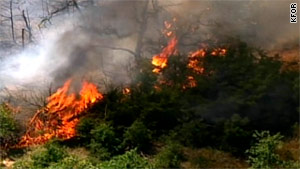 A wildfire burns in McLoud, Oklahoma, on Friday. Officials say more than 10 fires are burning across the state.
STORY HIGHLIGHTS
RELATED TOPICS

(CNN) -- A wildfire forced the evacuation of 70 to 80 homes in central Oklahoma on Friday, emergency officials said.

The homes are northeast of Oklahoma City, in southwest Lincoln County, an official with the Lincoln County Emergency Management Agency said.

The evacuations came as Lt. Gov. Todd Lamb, acting at the request of Gov. Mary Fallin, declared a state of emergency for 33 Oklahoma counties due to drought and the associated wildfires.

"These counties have struggled to see relief from our current drought, and with Oklahoma's high winds, conditions have unfortunately been ideal for devastating wildfires," said Lamb in a statement. "Declaring this emergency will provide aid to these struggling Oklahomans as they prepare to rebuild and restore what was lost."

More than 10 fires are burning across the state, Lamb said.

A number of houses have burned, said Keli Cain, a public information specialist for the Oklahoma Department of Emergency Management, in Oklahoma City. "Some of them destroyed."

"Both of those fires have had air support today," Cain said, referring to water drops from helicopters.

There were a couple of reports of minor injuries to the firefighters, she added.