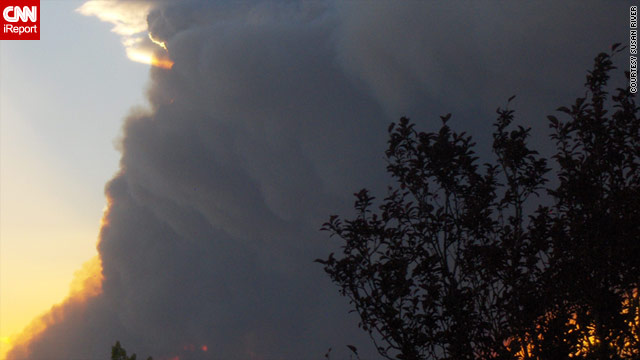 Are you there? Share photos, video but stay safe

(CNN) -- A raging wildfire near the Los Alamos National Laboratory in New Mexico has prompted the evacuation of more than 10,000 residents in the town as firefighters battle hot temperatures and high winds, authorities said Monday.

An estimated 8,000 people were expected to evacuate Monday, according to Kelly Stewart, a spokeswoman for Los Alamos County. Around 3,000 people left their homes after officials issued a voluntary order Sunday night, she said.

The Las Conchas fire, which flared up over the weekend, was reported to be approximately a mile from the lab's southwestern boundary Monday afternoon, according to a statement on InciWeb, an online interagency database that tracks fires, floods and other disasters.

The fire, which has spread across nearly 44,000 acres, is burning to the north and northeast. It is 0% contained.

Additionally, a one-acre spot fire was reported on the lab's property, at its southern boundary, according to Kevin Roark, a spokesman for the facility.

"We are maintaining a very watchful eye on these fires ... Our facilities are not threatened at this point," he said. "It's an unhappy thing, but we are confident in our ability to handle this threat."

Los Alamos, a center of American nuclear science, is one of the nation's top national-security research facilities.

The fire near the lab has raised concerns about whether hazardous materials kept there are being adequately guarded. Authorities say there are.

"They have anticipated the problem of fire and they've taken precautions," Sen. Jeff Bingaman of New Mexico told CNN Monday. "The structures that are central to the operation of the laboratory are well protected."

The lab is about 35 miles northwest of Santa Fe, New Mexico, on 36 square miles of property owned by the Department of Energy. More than 11,000 employees work at the facility.

It was closed Monday to nonessential employees and will remain closed on Tuesday because of the risks presented by the fire.

The lab is a joint project of Bechtel National, the University of California, The Babcock & Wilcox Company, and the Washington Division of URS, and is operated for the Department of Energy's National Nuclear Security Administration.