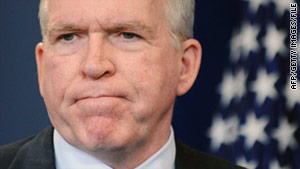 Speaking at Johns Hopkins University School of Advanced International Studies, Brennan said, "Indeed, this is the first counterterrorism strategy that designates the homeland as a primary area of emphasis in our counterterrorism efforts."

He added, "We are doing everything in our power to prevent another terrorist attack on our soil. ... It's not enough to simply be prepared for attacks, we have to be resilient and recover quickly should an attack occur."

Brennan said the ability to snap back quickly in the event of an attack would deny al Qaeda "the economic damage and disruption it seeks."

He made it clear the administration wants to follow a strategy of drone strikes and targeted raids against terrorists and avoid prolonged wars.

"Al Qaeda seeks to bleed us financially by drawing us into long, costly wars that also inflame anti-American sentiment," he said. "Our best offense won't always be deploying large armies abroad but delivering targeted, surgical pressure to the groups that threaten us."

The U.S. can't go after every terrorist group and must focus attention on those that seek to harm the U.S., Brennan said. He said al Qaeda and its affiliates still represent the greatest danger, even after the May raid by U.S. Navy SEALs that killed Osama bin Laden in Abbottabad, Pakistan.

Brennan said the U.S. wants to work with allies to bring terrorists down, but he would not rule out future unilateral strikes even in the territory of allies.

"As the president has said repeatedly, if we have information about the whereabouts of al Qaeda, we will do what is required to protect the United States -- as we did with bin Laden."

According to Brennan, the cache of videos and writings seized at bin Laden's compound shows the al Qaeda leader worried "al Qaeda is losing the larger battle for hearts and minds." Bin Laden "knew that he had failed to portray America as being at war with Islam" and that had hampered efforts to recruit more Muslims to his cause.

Brennan said bin Laden "called for more large-scale attacks against America, but encountered resistance from his followers and he went for years without seeing any spectacular attacks."

The president's counterterrorism adviser questioned how well Ayman al Zawahiri will do as the new paramount leader of al Qaeda, saying he "lacks bin Laden's charisma and perhaps the loyalty and respect of many in al Qaeda." But Brennan acknowledged Zawahiri might try to launch new attacks to prove he and al Qaeda are still relevant.

Brennan admitted there is a concern that Americans could become complacent since there hasn't been a large-scale attack here since 9/11 and since Osama bin Laden has been killed. But with the 10-year anniversary of 9/11 coming soon, Brennan said, "We want to make sure that we're as vigilant and we're as poised to detect and thwart these attacks."

He added Congress is well aware of the need to stay focused on the threat of terrorism.