Why there's no messing with Texas This summer, CNN's Defining America project is exploring the stories behind the numbers to show how places are changing. During the next week, get to know more about your neighbors all across the country -- how they live and love, what they believe in and how they came to call themselves Americans.

San Antonio, Texas (CNN) -- What does it mean to be a Texan?

In the hearts and minds of many, Texas pride is summed up in four words that have adorned countless T-shirts and bumper stickers for nearly three decades: "Don't mess with Texas."

To Mike Blair and Tim McClure, "Don't mess with Texas" will forever be the big hit of their careers, one that brought accolades and a few brushes with fame.

They didn't invent the line for pride, though; at first, it was an anti-litter message.

Blair and McClure were hired in 1985 to come up with a slogan for the Texas Department of Transportation's campaign to curb highway litter, which was costing the state roughly $20 million a year to clean up.

Their target audience? Mostly "bubbas in pickup trucks" who were chucking beer cans and the like out their windows as well as the average Texan who felt that littering was his "God-given right," said McClure, a lifelong Texan from Corsicana and co-founder of the Austin-based GSD&M Advertising. 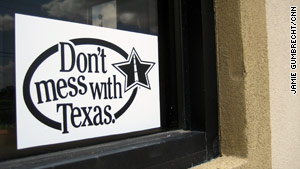 The ubiquitous line "Don't mess with Texas" is still used to discourage litter, and as a statement of Texas pride.

The slogan first appeared on bumper stickers in 1985 before hitting the airwaves during the 1986 Cotton Bowl game. Texas blues guitarist Stevie Ray Vaughan played a rendition of "The Eyes of Texas," ending with the simple utterance, "Don't mess with Texas."

A series of 26 TV spots followed during the next 12 years, featuring various Texas musicians, thus giving birth to what has become the unofficial slogan of Texas pride and a milestone in marketing genius.

"The line became bigger than what the campaign was about. It was almost as much about the attitude of Texas and Texans at the time, tough-talking, no-nonsense, go-about-our-business, get-things-done kind of attitude that has always been associated with Texans," said Blair, the executive vice president and creative director of GSD&M, who created the commercials in the first 12 years they ran.

"For us personally, there was a ton of satisfaction to know we created something that literally cleaned up the roads, and you could see the difference in the highways. It was just an absolute pleasure to have a part of something like that, to make the state cleaner, and I think a lot of people took pride in that."

McClure came up with the slogan in an eleventh hour "aha" moment as he was taking a walk near his home, looking at the garbage and recalling how his mother would tell him his room was a mess.

"It occurred to me that the only time I'd heard the word litter was in reference to dogs," he said. "Mess seemed like it would resonate better."

Initially, it was a tough sell to their clients in the Department of Transportation, a group of "buzz-cutted, conservative kind of characters" whose average age was about 107, the creators joked.

They got their way, and the rest is Texas-sized history. Between 1985 and 1997, the TV spots featured icons of the day such as Willie Nelsin, Lyle Lovett and LeAnn Rimes. The spots were so popular that people began calling in to radio stations to request them. Musicians contacted McClure and Blair asking to appear in the ads.

"It was a life-chaning experience to be able to work with these kinds of people and have them appreciate what we were doing," Blair said. "They got what we were doing. All of these people were prideful Texans -- others got here as fast as they could, as they say -- so it was really a perfect storm, as we say in the advertising world."

The advertising world agreed in 2006 when it awarded the slogan a broze plaque on the Advertising Week Walk of Fame, choosing it over other memorable advertising memes such as "Got Milk?" and Nike's "Just Do it."

The Texas Department of Transportation, which owns the property rights to the slogan, continues to use it to promote a statewide campaign to keep the roads clean.

The slogan will always resonate with Texans because it taps into what it means to be a Texan. And what is that, exactly?

For Blair, it's spending summers as a teen on a dude ranch in Bandera, the cowboy capital of the state, waking up to the aroma of juniper bushes, mesquite trees and cow manure.

For McClure, it's watching a huge star move across the skies above Corsicana one night and learning the next morning that what he'd seen was the Russian Sputnik, promoting the space race.

"We never say we're from Houston or Austin. Every Texan, when they say where they're from, they'll say 'Texas,'" McClure said. "Texas is not only a state of mind, it's a state of heart, state of soul. There's a sense of bigger than life here... People here are tough and rugged but know how to have a good time. They work hard but they know how to have a good time, and I think they enjoy the very simplest things in life."