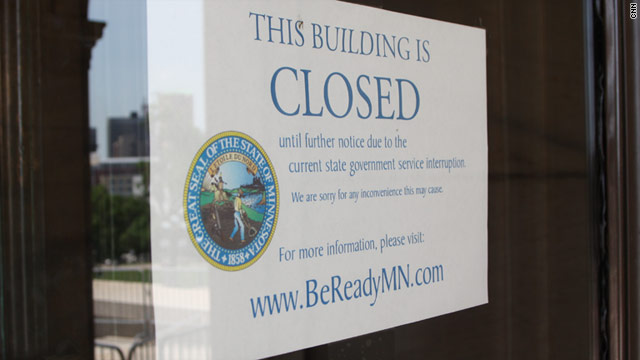 The Minnesota government shut down Friday after lawmakers failed to reach a budget agreement.
STORY HIGHLIGHTS

(CNN) -- The government shutdown in Minnesota could drag on for days as a spokeswoman for Gov. Mark Dayton said talks probably won't happen until after the July 4 holiday.

"I do not expect formal meetings to resume before Tuesday," Katharine Tinucci said in an e-mail Saturday night.

The Minnesota government was forced to shut down Friday for the second time in six years after lawmakers failed to reach a budget agreement before a midnight Thursday deadline.

That left thousands of people without jobs to go. State parks, the Minnesota Zoo and more than 80 rest stops are among the places shut down.

Gov. Mark Dayton held a news conference to announce an impasse in budget talks two hours before the deadline, saying the night was a one of "deep sorrow for me."

Government shuts down in Minnesota

The governor, a member of the Minnesota Democratic-Farmer-Labor party wants to raise taxes on the wealthiest 1.9% of Minnesotans, as well as cut spending.

Republicans accused the governor of giving up too soon.

Senate Majority Leader Amy Koch said in a statement issued by her office Friday that Republicans had "100 matched" some of Dayton's funding requests. She called the governor's decision a "major disappointment."

"We met several times in order to bridge the gap between our differences over more complicated areas of the budget and left thinking that a budget agreement was imminent," she said. "Unfortunately, Gov. Dayton has chosen to prioritize his rigid, tax-and-spend ideology, rather than prioritize the best interests of Minnesotans."

Republicans had proposed passing a temporary funding bill while they worked out their remaining differences with Dayton.

Zellers told reporters that budget talks were much closer than Dayton previously said.

The state Democratic-Farmer-Labor party blamed Republicans for the shutdown, accusing them of stubbornly favoring millionaires over other Minnesota residents.

"Minnesotans deserve more than what the GOP has forced upon them with this government shutdown," party chair Ken Martin said in a statement. "Our state's residents deserve much more than the devastating cuts to education, health care, public safety, and other vital services that the Republicans are digging in their heels to enact."

The last government shutdown was in 2005, when Tim Pawlenty was governor.

The shutdown means the closure of 46 state boards and agencies, with minimal staffing at 29 others, according to CNN affiliate WCCO.

Emergency and disaster agencies, Minnesota State Patrol, the state court system and the prison system are a few of the agencies that will remain open.

CNN's Chris Welch and Leslie Tripp contributed to this report