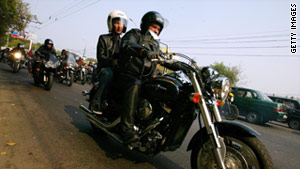 Motorcycle helmet use dropped from 67% in 2009 to 54% in 2010, according to a national highway safety organization.
STORY HIGHLIGHTS
RELATED TOPICS

(CNN) -- A bareheaded motorcyclist participating in a ride to protest mandatory helmet laws was killed when he was thrown over the handlebars in Onondaga, New York.

Philip A. Contos, 55, of Parish, New York, was on a ride organized by the Onondaga chapter of American Bikers Aimed Towards Education (ABATE), state police said Sunday.

Contos hit his brakes, began fishtailing and lost control of his 1983 Harley Davidson. He shot over the handlebars, hit his head on the pavement and was taken to Upstate University Hospital in Syracuse, New York, where he was pronounced dead.

State police say evidence at the scene plus information from the attending medical expert indicated Contos would have survived had he been wearing a helmet as required by state law.

Asked about the apparent irony of Contos' death, the statewide president of ABATE, Thomas Alton, said, "We are riding at an increased risk and accept that. ... This individual was a seasoned rider, not a newbie. He made an adult decision. A full decision to ride in the manner he rode in."

Another New Yorker who has been a motorcyclist for over 50 years, Joseph Costantini, said, "I would never ride without a helmet -- even in a state that says you don't have to. I understand where the protesters are coming from because ultimately it's a matter of choice. For me, I would wear a helmet no matter what. ... Must feel great to ride without a helmet because sometimes it's uncomfortable. ... I'm sure his family isn't going to be happy."

Motorcycle helmet use dropped from 67% in 2009 to 54% in 2010, according to a press release issued by the Governors Highway Safety Association.

"This is another sad and tragic example where we have lost someone due to the lack of wearing a helmet," said Jonathan Adkins, communications director for the association.

According to Alton, a large percentage of motorcycle fatalities are due to inexperience and drivers not seeing motorcyclists when switching lanes or making turns.

ABATE of NY Inc. is organizing a memorial "to honor an individual who rode for freedom and risked his all for freedom," he said. A formal date is still to be determined.

Annual motorcycle deaths have more than doubled since the late 1990s with 5,290 in 2008, based on a report issued by the National Highway Traffic Safety Administration.