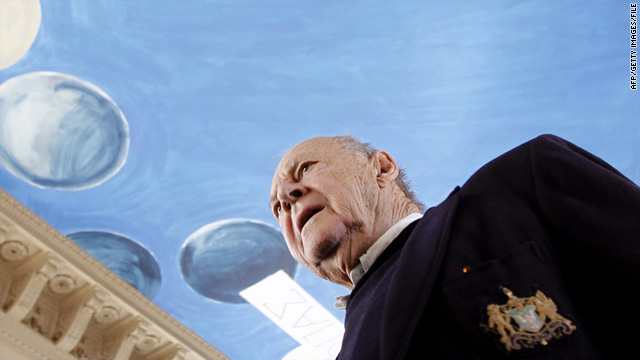 The Gagosian Gallery, which represented Twombly and his works in the U.S. and abroad, announced his death. The cause of death was not immediately known.

"We will not soon see a talent of such amazing scope and intensity," said Larry Gagosian, art dealer and owner of the Gagosian Gallery.

"The art world has lost a true genius and a completely original talent."

Twombly's family also issued a brief statement saying they were saddened by the artist's passing.

"The world has lost a brilliant artist and our family has lost a legendary figure ... I had spoken to him just recently; he was a dear cousin and friend," said Twombly's first cousin, Marcia Twombly Gray.

Throughout his career, Twombly was lauded for blurring the lines between drawing and painting, and challenging the ideals of modern art with his scribbles.

But beneath the child-like appearance of his artwork, art enthusiasts say Twombly revealed a unique and ingrained appreciation for ancient poetry and culture.

His works often alluded to battles described in both Greek and Roman poetry. The paintings that comprise the "Leaving Paphos Ringed With Waves" (2009) collection and the "Coronation of Sesostris" (2000) collection were inspired by quotes from 7th century B.C. Greek poet Alkman.

After studying art in the United States at various institutes, Twombly moved in 1957 to Italy, where he began to extensively develop his career. Though he is best known for his large-scale paintings, Twombly also sculpted, using objects he found and later making casts in bronze.

In 2010, Twombly unveiled a 3,750 square-foot ceiling painting for the Salle des Bronzes in the Louvre. He is the third contemporary artist to be invited to install a permanent work in the museum, according to the museum's website.

The Menil Collection in Houston also has a permanent installment featuring Twombly's works that opened in 1995. The Cy Twombly Gallery is organized chronologically to walk visitors through the evolution of the artist's style. It has suites that feature a number of paintings and sculptures, according to the Menil site.

The gallery is unique in the world and until recently, it was the only museum building featuring a permanent installment of Twombly's work, said Vance Muse, communications director for the Menil.

The building's design was based on a sketch by Twombly and built by architect Renzo Piano, the site said.

Twombly is often listed alongside other celebrated American artists like Robert Rauschenberg and Jasper Johns, but Muse said Twombly stands out because of the way he melded epic poetry with art.

"He was a voracious reader and he put a lot of writing into his paintings .. there are influences from Homer and epic poetry in his works that ground them in literary tradition," Muse said.

"He really persevered in his own work and was so independent ... it's amazing how true to his vision he kept and in the end he was widely, widely respected," he said.

Art enthusiasts took to twitter Tuesday to comment on Twombly's death. Actor Steve Martin, who is a noted art collector, tweeted, "One of the great 20th century artists has died, Cy Twombly. A real master."