405 to reopen ahead of schedule 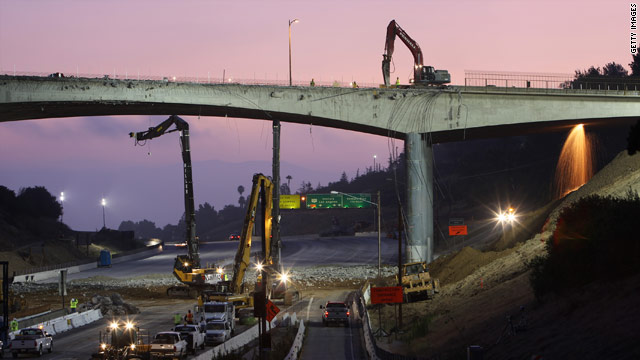 The freeway has been closed since Friday night to allow crews to demolish a section of bridge to make way for a car pool lane.

The anticipated gloom and doom didn't produce gridlock. In fact, rather heavenly highway conditions were reported despite the closing of the major freeway for an expansion project.

Southern California residents were heeding an unprecedented local public awareness campaign urging drivers to stay home while Interstate 405 was closed in the heart of the city, the nation's second-largest.

But officials still weren't taking chances early in the weekend.

"Carmaheaven, I've heard that," Gish said. "Well, you know, I think what's important to address is if people start driving as usual, we will have Carmaggedon.

"It's been relatively light because people have been listening to the message, and they are not out on the road. We want to make sure they don't get complacent and say, 'There's nothing to get alarmed about and I may as well go out.' And if they do, we may see those delays that we warned them about," Gish said.

The closure of the 405 is being deemed such a potentially calamitous event that locals called it "Carmaggedon."

That's because southern California is notorious for its love affair with the car and its reluctance to embrace public transportation. One of the busiest freeways in the country, the 405 is one of two mountain passes in the heart of Los Angeles and is the major coastal artery connecting southern California with the rest of the state.

"We are the car capital of the United States of America and the single-passenger-car capital," Villaraigosa told CNN.

A 10-mile stretch of 10-lane I-405 closed for the demolition of a bridge section made for a surreal scene overnight -- a stretch of freeway without any traffic. It is expected to remain that way for about 53 hours.

Crews closed ramps late Friday on the 405, where it passes over the Santa Monica Mountains, California Department of Transportation officials said.

The $1.2 billion construction project calls for replacing a portion of a bridge at Mulholland Drive, a mountain summit road that is featured in many Hollywood films, authorities said. A year from now, crews will have to shut down the 405 again to replace a final portion of the Mulholland Drive bridge, officials said.

"It doesn't have to be 'Carmageddon.' That's why we have done so much outreach to the public," the mayor said.

The weekend construction project should be completed by 5 a.m. Monday to accommodate the morning rush hour, officials said.

The project also calls for adding a car-pool lane in each direction, creating "the largest HOV system in the world" at 48.6 miles in length between the San Fernando Valley and Orange County, said Mike Miles, the California Department of Transportation's director for Los Angeles and Ventura counties.

The two-year project will replace two more bridges, also to accommodate the widening of the 405, and will improve about two dozen on-off ramps and add 18 miles of sound-deadening walls for nearby residents, Miles said.

"This is a big project that is much needed, and it will be a great benefit to the public," Miles said.

The 405 is usually one of the busiest freeways in the country, carrying about 500,000 cars a day through the Sepulveda Pass, a critical artery connecting Californians along the coast. The 405 achieved notoriety on national television as the corridor that former NFL player O.J. Simpson used as he was being slowly chased by police in 1994.

The highway also cuts through the west side of Los Angeles, an area that includes the high-status communities of Bel Air, Brentwood, Beverly Hills and Santa Monica.

Los Angeles International Airport is urging travelers to get there by public transit, especially rail, or to stay at nearby hotels for early morning flights.

There is an app, or several, for "Carmageddon."

KABC has partnered with Waze, the mobile social traffic and navigation app, to help navigate the traffic. "The app provides free turn-by-turn GPS navigation based on the live conditions of the road," the station said.

Celebrities are even tweeting -- cheekily -- about this weekend's affront to the Los Angeles driving experience.

Twitter titan and actor Ashton Kutcher has gotten into the act: "LAPD askd me 2tweet: 405fwy btwn 10 & 101 will b closed July16-17. In xchange I would like a free pass on that stoplight tickt IT WAS YELLOW."

When shown a copy of the tweet while he was being interviewed on CNN, the mayor laughed about the request to fix the ticket. "No, thank you, Ashton," Villaraigosa said.

CNN's Sonya Hamasaki and Zohreen Adamjee contributed to this report.