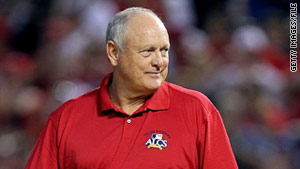 Nolan Ryan was hospitalized for what was believed to be a recurrence of a heart condition, the Texas Rangers said.
STORY HIGHLIGHTS
RELATED TOPICS

Ryan was hospitalized in Houston "for what is believed to be a recurrence of the heart condition which he has previously experienced," the team said in a statement.

Test results showed no change in his heart condition, which will continue to be treated with medication, the statement said.

He was taken to the hospital Sunday after experiencing discomfort Sunday at his home in Georgetown, Texas, the statement said.

Ryan expects to be released in a few days, the Rangers said.

During 27 years in the major leagues, Ryan threw a record 5,714 strikeouts while playing for the New York Mets, the California Angels, the Houston Astros and the Texas Rangers.

In 1999, he was elected to the Baseball Hall of Fame, which says he had "a blazing fastball that approached 100mph and a work ethic like none other."