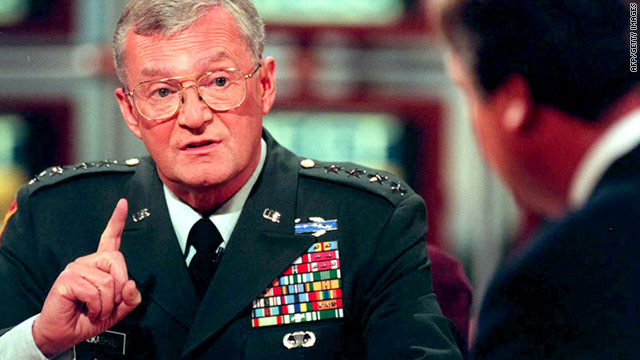 (CNN) -- Retired Army Gen. John Shalikashvili, who rose from being an Army draftee to serving as chairman of the Joint Chiefs of Staff, has died of complications from a stroke, his executive assistant said Saturday. He was 75.

An open memorial service will be held on August 6 at the Tacoma Convention Center. A funeral will be held at a later date at Arlington National Cemetery.

Born in Poland in 1936, Shalikashvili became the first foreign-born chairman of the Joint Chiefs of Staff in 1993. He held the post until his retirement in 1997, serving under former President Bill Clinton, who awarded Shalikashvili the Presidential Medal of Freedom.

Prior to that, he was NATO's 10th supreme allied commander in Europe.

"The United States has lost a genuine soldier-statesman whose extraordinary life represented the promise of America and the limitless possibilities that are open to those who choose to serve it," President Barack Obama said in a statement. "From his arrival in the United States as a 16-year old Polish immigrant after the Second World War, to a young man who learned English from John Wayne movies, to his rise to the highest ranks of our military, Shali's life was an 'only in America' story."

Shalikashvili was drafted into the Army in 1958 and rose through the ranks, serving in Vietnam from 1968 to 1969 and heading up the 1991 international relief operation that airlifted food to and provided protection for the Kurds in northern Iraq.

Obama said the general forged closer ties with Russia and improved the quality of life of U.S. service members and their families.

Shalikashvili was granted U.S. citizenship after his family immigrated to Peoria, Illinois, from southern Germany, where they had sought refuge after the 1944 Warsaw Uprising in Poland.

Shalikashvili suffered a stroke in 2004, but continued to work in several capacities.

Most recently, he was in the news because of his support for a repeal of "don't ask, don't tell," the ban of gays and lesbians serving openly in the U.S. military. He also had served as a visiting professor at the Center for International Security and Cooperation at Stanford University.

The retired general is survived by his wife, Joan; their son, Brant; and other family members.