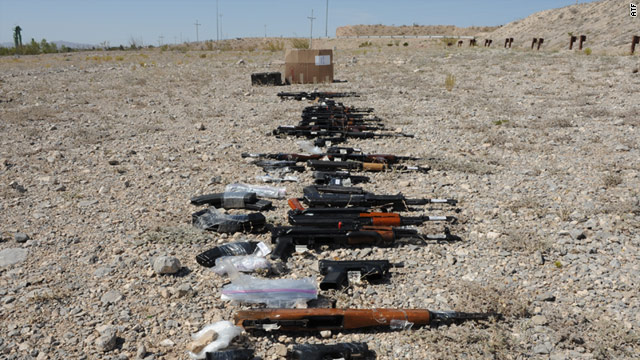 Under the "Fast and Furious" program, ATF agents allowed weapons bought in the U.S. to "walk" into Mexico.
STORY HIGHLIGHTS
RELATED TOPICS

Washington (CNN) -- U.S. officials kept their Mexican counterparts in the dark about a widely criticized gun-trafficking probe even as rising numbers of weapons reached the hands of Mexico's drug cartels, a congressional committee reported Tuesday.

The Justice Department's Bureau of Alcohol, Tobacco, Firearms and Explosives also held back key details about "Operation Fast and Furious" from agents based in Mexico City when they raised alarms, according to the report.

"Not only were they stonewalled by their colleagues, they were actively thwarted in their attempts to find out what was happening," the House Oversight and Government Reform Committee concluded.

"Fast and Furious" has been the subject of congressional investigations since December, when two weapons traced to the operation were found at the scene of a U.S. Border Patrol agent's killing in Arizona. More than 2,000 guns may have reached the hands of the cartels as a result of the probe, in which ATF agents allowed weapons bought in the United States to "walk" into Mexico.

"ATF senior leadership allegedly feared that any such disclosure would compromise their investigation," states the report, written by the joint staff of the committee. "Instead, ATF and DOJ leaderships' reluctance to share information may have only prolonged the flow of weapons from this straw purchasing ring into Mexico."

Carlos Canino, the ATF's acting attache in Mexico City, informed the country's attorney general of the probe only after learning that guns monitored by the investigation were involved in the killing of the brother of a top prosecutor in Mexico's Chihuahua state. Canino said he disclosed the operation despite the absence of clear direction from Washington "because I did not want her to find out through media reports where these guns had come from."

"If I hadn't told the attorney general this, and this had come out in the news media, I would never be able to work with her ever again, and we would be done in Mexico," the report quotes Canino. "We just might as well pack up the office and go home."

Even then, ATF officials in Mexico City did not learn the full extent of the "Fast and Furious" probe until after it was shut down, following the December killing of Border Patrol Agent Brian Terry.

The operation began in late 2009 and concluded in January. Investigators say the ATF allowed more than 2,000 weapons to be purchased illegally and transported in to Mexico, where heavily armed drug gangs have been battling Mexican authorities for control of the streets for several years.

In an interview with committee investigators, Canino called the operation "the perfect storm of idiocy" and warned, "Brian Terry is not the last guy."

"Unfortunately, there are hundreds of Brian Terrys, probably, in Mexico," he said.

The result has been a major black eye for the agency and put the future of its acting director, Kenneth Melson, under a cloud.

Canino and his then-boss, Darren Gil, were told to "stand down" about the Phoenix-based operation by ATF leaders in Washington, the report states.

"According to ATF leadership, not only was everything 'under control,' but everyone in ATF and DOJ were well aware of the investigation in Phoenix," the report states.

The congressional investigation has been led by Rep. Darrell Issa, R-California, the oversight committee's chairman, and by Iowa GOP Sen. Charles Grassley, whose office was approached by ATF whistleblowers.

"It's incomprehensible that officials at the Justice Department, the ATF and the U.S. attorney's office would keep their counterparts at the U.S. Embassy in Mexico City in the dark about Operation Fast and Furious," Grassley said of the latest report. "Keeping key details secret while straw purchasers continued buying for gun traffickers jeopardized our relationship with our southern ally and put lives at risk."

Lawmakers have repeatedly questioned which top officials were told about the operation, and Tuesday's report names Assistant Attorney General Lanny Breuer as the top Justice Department official in the know. The Justice Department did not respond to a request for comment on the report.