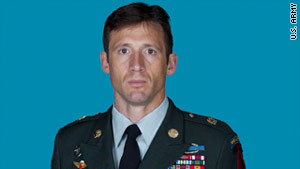 Washington (CNN) -- Army Master Sgt. Benjamin A. Stevenson, 36, was on his 10th tour of duty in the war zones of Afghanistan and Iraq when he was killed Thursday in a remote area of eastern Afghanistan.

Few details are available on the circumstances that led to the death of the highly decorated soldier, from Canyon Lake, Texas.

However, a U.S. military official has now confirmed to CNN that Stevenson was the only U.S. casualty of a brutal two-day firefight against an al Qaeda-related group that erupted when U.S. and Afghan troops attacked an insurgent encampment, killing nearly 80 foreign fighters.

That single piece of information is a rare glimpse into the world of U.S. special operations forces who have done more tours than most in the last decade. Special forces tours of duty typically last six to eight months, compared to regular combat tours of one year. Many troops have spent more time away from home than at home, but little is said about what they do these days in fighting insurgent strongholds.

The official who confirmed Stevenson was part of this raid declined to be named because he was discussing the Army's Special Operations Command.

Stevenson was part of a U.S. and Afghan special operations mission that went in to attack the area in Afghanistan's Paktika province.

The camp they attacked and the fighters there were part of the so-called Haqqanni network, which is responsible for many recent attacks in Afghanistan and is closely tied to al Qaeda. The Haqqanis traditionally rely on Afghan and Pakistani fighters, but in this instance most of the fighters there who were killed were Arabs and Chechens, brought into Afghanistan from Pakistan.

That alone is a worrisome trend. A second U.S. military official tells CNN that the US is seeing the Haqqanis increasingly turn to foreign fighters they bring into Afghanistan.

"This is how they are expanding their capabilities," the official said. The U.S. believes this camp was an assembly and training point for these foreign fighters to stage attacks across Afghanistan.

Coalition forces were led to the camp by former insurgents, but it's not clear if the extent of the opposition was immediately clear to the coalition.

When the dust finally cleared, Stevenson was the only fatality. The U.S. military, still cloaked in secrecy, won't say how he perished.