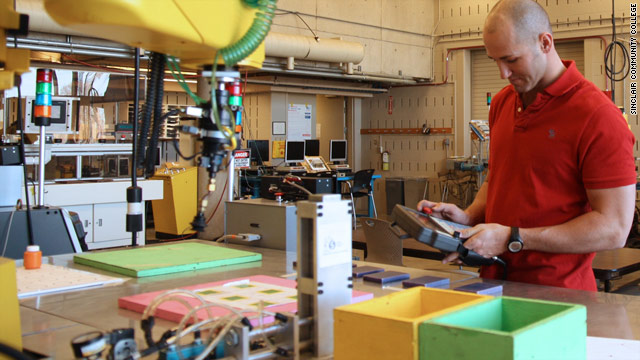 (CNN) -- Todd Sollar used to think a college education was a waste of time and money.

"I thought I could bypass college after high school and get a good paying job with General Motors and avoid the high cost of an education," he said.

The 34-year-old from Centerville, Ohio, was groomed as a young adult to work with his hands and to pursue production jobs in his hometown area near Dayton.

After high school, he worked for two years at Airborne Express (now DHL) in Wilmington, Ohio, then moved to the General Motors' Moraine plant where he worked on the body shop assembly line for 11 years churning out Chevrolet Trailblazers, GMC Envoys and even Saab SUVs.

"The money and benefits at GM were good and I was very comfortable," he said.

The good life didn't last as long as Sollar wanted. In 2008, GM closed his plant, leaving him and thousands of others without jobs.

"It felt like the end of the world and I was scared when they let us go," he said. "It was a struggle, because I thought we'd stay open."

I thought I could bypass college after high school and get a good paying job with General Motors and avoid the high cost of an education.
--Todd Sollar

GM was the only way of life for many former employees and the plant closure was a major blow to their psyches.

Employment options for a high school graduate in the Dayton, Ohio, area were bleak when Sollar lost his job in 2008. The economy was in a downturn and the possibility of finding a job that paid well was slim. He and his former colleagues struggled to find work.

Two of his friends committed suicide after they were let go from GM. Sollar vowed to find a positive path toward his new future, despite the dismal economic climate.

"My only hope for a decent job at that time required me to seek out a higher education," he said.

In the Fall quarter of 2008, Sollar enrolled in Sinclair Community College in Dayton and pursued an associate degree in applied science in automation and control technology with robotics. Sinclair is one of nearly 1,200 public and community colleges across the U.S.

This year, Sinclair's summer session had the highest enrollment in the school's nearly 125-year history, with 13,041 students enrolled, a 3% increase over last year. The school's president, Dr. Steven Johnson, said community colleges across the country are experiencing increases in enrollments, as well.

Johnson said a downturn in the economy is among the biggest reasons why more Americans are enrolling in community colleges, these days. The Dayton area has been hit especially hard with job losses in the automotive industry. Students are seeking new marketable job skills and community colleges offer a viable means to that end. 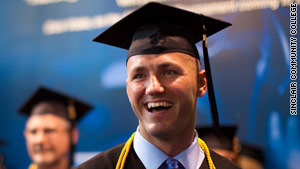 Sollar graduated with honors from Sinclair in June 2011.

For Sollar, scholarships and grants covered his full-time tuition, which averages between $2,259 to $3,598 a year at Sinclair. A severance package deal from GM covered his living expenses while he attended school.

He had to take additional classes beyond the core curriculum to make up for the lack of college prep classes he missed taking in high school. Despite the extra workload, he graduated with honors in June of 2011.

Looking back, Sollar wished he would have attended community college earlier in his life, instead of waiting until his 30s to attend school.

"Nothing is permanent in this world, especially jobs," he said. "You can't take for granted that a job is going to support you for your entire life."

Sollar said an education was the key to expanding his horizons and opening new employment possibilities. 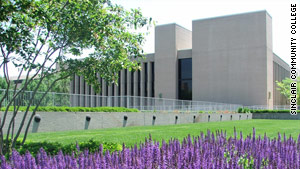 Sinclair is one of nearly 1,200 public and community colleges across the U.S.

Before graduation, he landed a job with Gosiger Automation in Dayton, where he now works full-time as an electronic mechanical technician. He's not making as much money as he once did with GM, but hopes that will change one day as he advances through his newly developed career.

He said he couldn't have landed this position without attending Sinclair.

"When I was in high school, I was told that I was not 'college material,'" he said. "Yet, I discovered later in life, that wasn't true."

Sollar's wife, who is due with their first child in October, plans to encourage his future child to receive a higher education, too.

"My child will have no choice," he chuckled. "I will make that kid attend college."