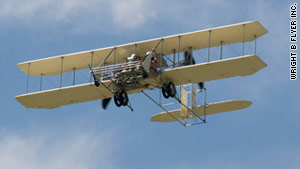 The plane was a copy of a Wright Model B aircraft produced seven years after the brothers' celebrated first flight.
STORY HIGHLIGHTS
RELATED TOPICS

Read more about this story from CNN affiliate WHIO

(CNN) -- A replica of a 1910 aircraft built by flight pioneers Orville and Wilbur Wright crashed Saturday in a field near Springfield, Ohio, killing the two men aboard, the Ohio State Highway Patrol reported.

The aircraft was reported downed shortly before 11 a.m., the agency said in a statement. It had taken off from Springfield Beckley Municipal Airport.

The cause of the crash remained under investigation, according to the highway patrol. It's looking into the incident along with the Federal Aviation Administration and the National Transportation Safety Board.

The plane, owned by Wright "B" Flyer Inc. of Dayton, Ohio -- a volunteer nonprofit group -- was a copy of a Wright Model B aircraft produced seven years after the brothers' celebrated first powered flight.

It began test flights in June and performed well, according to a press release on the organization's website.

The organization designed the plane to resemble the 1910 edition, but built it so that it could be more easily taken apart and shipped to international events, the company said in the June press release. It was built with a modern engine, controls and materials, the organization said.

Gum and Cary were members of the group's board of trustees and Cary was a former president, CNN affiliate WHIO-TV reported.