Federal judge: CIA not in contempt for destroying interrogation tapes 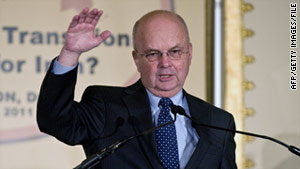 New York (CNN) -- A federal judge on Monday rejected arguments that the CIA should be held in contempt for destroying videotapes allegedly showing the torture of detainees during interrogations.

The ruling by Judge Alvin K. Hellerstein of the U.S. District Court for the Southern District of New York came in a motion by the American Civil Liberties Union that the intelligence agency be held in contempt. Although he ruled against the ACLU motion, the judge applauded the efforts of the ACLU's legal team for prompting the disclosure of thousands of documents related to detainee treatment.

"What you and your colleagues have done in getting this story to the American public has been extraordinary," Hellerstein said.

In a rare move, Hellerstein sanctioned the CIA by ordering it to pay attorneys fees for the ACLU.

But he stopped short of holding the spy agency in contempt for the destruction of interrogation tapes.

The tapes were made in 2002 and showed the interrogations of two suspected al Qaeda leaders -- Abu Zubaydah and Abd al-Rahim al-Nashiri. According to former CIA officer John Kiriakou, some of the videos showed controversial interrogation techniques including waterboarding, which simulates drowning.

Government officials have said the tapes were destroyed in November 2005 at the orders of Jose Rodriguez, then head of the CIA's National Clandestine Service (NCS), with the approval of NCS lawyers. Then-CIA Director Mike Hayden wrote in a December 2007 staff memo saying the tapes were made as "an internal check" on the CIA's use of harsh interrogation techniques and the decision to destroy them was made "only after it was determined they were no longer of intelligence value and relevant to any internal, legislative or judicial inquires."

The tapes had been part of a massive Freedom of Information Act (FOIA) request from the ACLU. In 2007, the ACLU moved for contempt and sanctions against the CIA but the case was deferred pending a criminal investigation by a special prosecutor.

The ACLU renewed its motion in February arguing that "high-level CIA officials knowingly flouted their obligations under FOIA and this Court's orders -- apparently with the specific intent of evading the public accountability that FOIA was enacted to ensure," according to the plaintiff's lawsuit.

On Monday, ACLU lawyer Lawrence S. Lustberg was back in federal court demanding that the CIA and Rodriguez be held in contempt and sanctioned in the form of attorney's fees for "brazenly violating" the judge's orders.

"It's the invocation of a remedy that has existed literally for centuries -- that nobody is above the law," Lustberg said.

"There has to be accountability in every level of government."

Assistant U.S. Attorney Ausa Tara LaMorte told the court that the CIA has turned over documents related to the case and has implemented new protocol regarding the destruction of records. Beyond the new policies within the agency, LaMorte said, the CIA has offered to pay the plaintiff's attorney's fees. The contempt citation, LaMorte argued, was unwarranted.

"Every single argument the plaintiffs have made show that they want to exact retribution from the CIA," said LaMorte.

With Hellerstein's ruling Monday, details of CIA payment for the ACLU legal fees still have to be worked out.