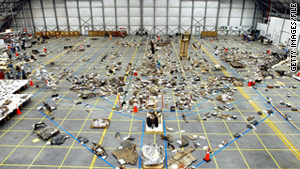 Recovered debris from the space shuttle Columbia lies in a hangar at Kennedy Space Center in May 2003.
STORY HIGHLIGHTS
RELATED TOPICS

(CNN) -- The recent drought has ruined millions of acres of farmland in Texas, turning lakes into mud puddles, but in the East Texas city of Nacogdoches, authorities say, the drought may have done something good: Unearthed a piece of the space shuttle Columbia.

The object, which is about 4 feet in diameter, was found in a local lake. NASA says it is a tank that provides power and water for shuttle missions.

"It's one of ours," said Lisa Malone, a spokeswoman for the agency.

Malone added that NASA is trying to develop a plan to recover the item, but it could take weeks to get it.

"We're looking into whether we'll send a team out or local authorities can," Malone said.

Authorities say the object was found after the drought caused the waters to recede in Lake Nacogdoches, and they notified representatives from NASA on Friday.

"The lower water level has exposed a larger than normal area on the northern side of the lake," said Sgt. Greg Sowell of the Nacogdoches Police Department.

The item is full of mud and is in a remote area near a private shoreline, Sowell said.

Nacogdoches made headlines in 2003 when debris from the shuttle Columbia disaster was found there.

"We want to remind everyone that the rules are the same as they were back in 2003. If this object is indeed a part of the shuttle, it is government property, and it is a criminal offense to tamper with it," Sowell said.