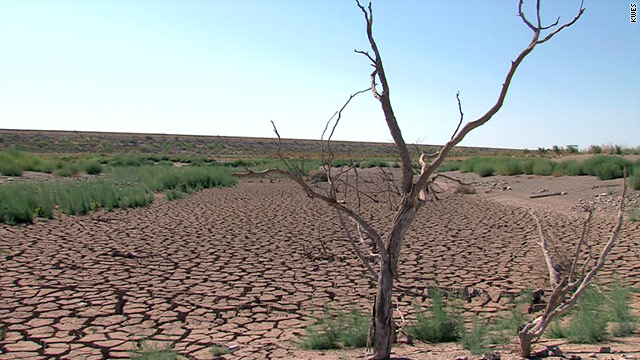 Robert Lee, Texas, has received 3 inches of rain in the past 12 months.
STORY HIGHLIGHTS
RELATED TOPICS

In normal times, the reservoir serves not only the 1,000 or so people who live in Robert Lee, but also Midland, Odessa and Big Spring -- cities with a combined population over 230,000.

But these are not normal times. In the past eight months this area has received 1 inch of rain. Only 3 inches have fallen in the past 12 months, and even though Robert Lee is now the reservoir's only customer, if the rains don't come, it will be dry by late winter.

Texas is suffering from the third-worst drought in the state's history, according to state Agriculture Commissioner Todd Staples. More than 2 million acres of farmland have been abandoned due to the exceptional dryness, he said, and the weather has been "excruciatingly painful" for producers, affecting the harvest of cotton, corn and grain.

Tropical Storm Don teased Texas last weekend, making landfall between Beaumont and Corpus Christi, but it petered out into a tropical depression far, far away from West Texas and shriveling water sources like Lake Spence, some 250 miles west of Dallas.

Photos posted online by CNN affiliate KWES in Midland showed parts of the reservoir that have been reduced to the basics -- the river that feeds it surrounded by acres of crackled, dried-out lake bed, some of it already being reclaimed by vegetation.

"I'll be 65 tomorrow and I've never seen anything like it," Mayor John Jacobs of Robert Lee said of the situation. The bigger cities, which have other water sources, are no longer allowed to pull from Lake Spence, but even with only Robert Lee pumping water, if it doesn't rain the town can expect to run dry "around the first of the year or March, maybe," he said.

The town is down to less than 1% of its water supply, and residents are under Phase 3 drought contingency plan, meaning no outdoor watering at all, he told KWES.

Already, to try to achieve a 35% reduction in daily usage, officials are encouraging residents to find multiple uses for bathwater and other spent water.

Right around the corner lies the prospect of rationing, or as Jacobs described it to the TV station, "a pro-rated deal where everyone gets so much water per family member."

The only option for getting the water from somewhere other than Lake Spence is by pipeline or truck. Jacobs said the town still has an emergency plan to lay a 12-mile pipeline to Bronte, the nearest water supply, but not a foot of pipe has been laid yet.

"We're trying to jump through hoops with the state to get the permits," he said.

And, it's not as though anyone in West Texas is doing much better.

"I don't know where you go to find someone who has excess water," Jacobs told KWES. "We'd probably use the National Guard and I have no idea where they would get the water to truck in."

Llano, to the south, gets its water from the Llano River, which is drying up, and San Angelo, 32 miles to the south, is down to a two-year supply.

San Angelo also is home to the nearest operating car wash -- a luxury by Robert Lee standards these days, the mayor said.

"You can see lots of pretty nasty cars around here."