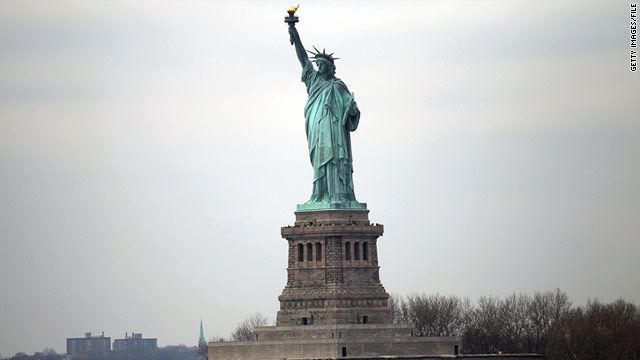 New York (CNN) -- The Statue of Liberty and Ellis Island will undergo renovations totaling more than $27 million beginning in late October, according to Secretary of the Interior Ken Salazar.

Liberty Island, where the iconic statue is located, will remain open during the yearlong project and views of Lady Liberty will remain largely unobstructed.

"Two years ago, when we reopened Lady Liberty's crown to visitors for the first time since the September 11 attacks, I promised that we would continue to upgrade the interior to make it safer and more accessible for all," Salazar said Wednesday. "With today's announcement, we are taking a major step in bringing a 19th century icon into the 21st century."

The National Park Service will keep the monument open to the public through the October 28 celebration of the 125th anniversary of the statue's dedication. It will be closed the following day as work commences.

The National Park Service awarded the work to Joseph A. Natoli Construction Corporation of Pine Brook, New Jersey, to install code-compliant stairways within the monument, refurbish mechanical, electrical and fire suppression systems, replace the elevators, and improve restrooms. The upgrades will also allow for increased visitor access to the monument, including the pedestal and the museum.

Similar work will take place at facilities on Ellis Island, the entry point to the United States for millions of immigrants.

The project will be funded through a combination of National Park Service appropriations and the park Concession Franchise Fee program.

National Park Rangers will remain on site to provide tours of the grounds and history of the statue to visitors, said Jane Ahern, spokeswoman of the Statue of Liberty National Monument. Approximately 3.5 million people visit Liberty Island every year.