Illinois college becomes first to ask undergrads if they're gay 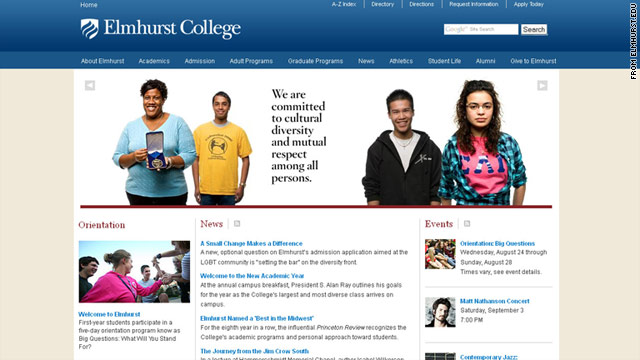 (CNN) -- Elmhurst College, a private liberal arts school in suburban Chicago affiliated with the United Church of Christ, has become the first college in the country to ask an optional question about a student's sexual orientation and gender identity on an undergraduate admission form, according to the school and a gay rights advocacy group.

"Would you consider yourself a member of the LGBT (lesbian, gay, bisexual, transgender) community?" the new application asks prospective enrollees.

That optional demographic question is among others about religious affiliation, language spoken at home and whether they have worked with a community-based organization, according to the college and the advocacy group.

The sexual orientation question is designed to help the college advance diversity and connect prospective students with school resources such as scholarships and campus organizations.

"We took this step in an effort to better serve each of our students as a unique person," Elmhurst President S. Alan Ray said in a news release Thursday. "It also allows us to live out our commitments to cultural diversity, social justice, mutual respect among all persons, and the dignity of every individual. These are among the core values of this institution. They provide the foundation for all of our academic, student and community programs," Ray said.

Added Gary Rold, dean of admission, in the media release: "All of the information that we glean from our admission applications is used to provide a wide variety of opportunities, services and programming that is appropriate to each individual student."

"Elmhurst College has really set the bar when it comes to college admissions and allowing LGBT students to be who they are and to be out," Windmeyer said. "As a result, they can take responsibility for setting a safe learning environment for all students."

For the past five years, Campus Pride has been trying to get the optional question included in a standardized online college application now used by more than 400 U.S. universities, including Ivy League schools, Windmeyer said.

But that effort by Campus Pride has been unsuccessful, Windmeyer said.

Elmhurst College is among the remaining 2,100 public and private four-year institutions in the country that are not part of that nonprofit membership organization using the standardized online application, Windmeyer said.

Located in Elmhurst, Illinois, the college is affiliated with the United Church of Christ, a Protestant denomination that was the first to ordain a woman in the 19th century. It was also the first to ordain an openly gay person in the 20th century: William R. Johnson, a graduate of Elmhurst College, who became a church minister in 1972, according to the school.

The school describes itself as being at times "pioneering on social justice issues," according to its news release.

"Of course, we recognize that this question may signal to applicants that Elmhurst is 'walking the walk' of support for lesbian, gay, bisexual and transgender persons," Ray said in the release. "This is a source of pride for us. It is entirely consistent with our mission and vision to prepare students to "understand and respect the diversity of the world's cultures and peoples."