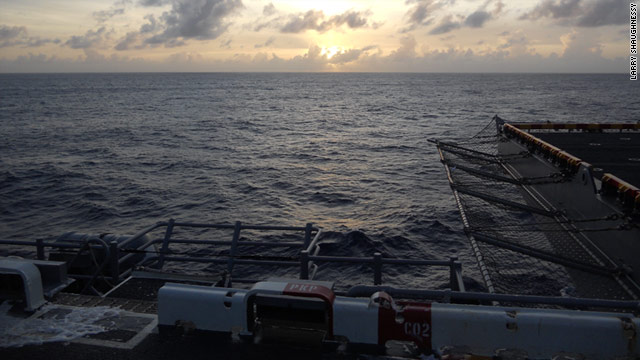 The USS Wasp is heading back to the U.S. coast to offer humanitarian aid in the aftermath of Hurricane Irene.
STORY HIGHLIGHTS

Aboard The USS Wasp (CNN) -- At daybreak Sunday, dozens of U.S. warships were steaming back towards the U.S. coast prepared to assist civilian officials with the emergency response to Hurricane Irene, if military aid is requested.

"What you are seeing is lessons learned from what has happened over the past few years," Rear Adm. Kevin Scott told CNN in an exclusive interview aboard the USS Wasp. "The response that's required after a major catastrophe like Hurricane Katrina or Rita requires all the resources that the nation has to bear and the military has such great capability."

The Wasp is an amphibious assault ship designed to carry about 2,000 Marines right to the coast of a country at war. But in this case it's Adm. Scott's flagship for Amphibious Task Force 26, a group of six ships all capable of launching and retrieving heavy lift helicopters as well as landing craft that can land on any beach with 160 tons of food, water or emergency supplies.

Thirty-eight ships from the Navy base in Norfolk, Virginia avoided Hurricane Irene by maneuvering in a wide swing north then east of the storm as it moved up the U.S. coastline. "Ships are safer at sea then they are in port during a hurricane or heavy weather. So we get underway; we get out of the danger area," said Lt. Cmdr. Timothy Reiswig, the navigator of the USS Wasp.

Protecting these expensive warships from Hurricane Irene was the first part of what's appearing more likely to be a two-part mission. The second is humanitarian relief.

Saturday, Defense Secretary Leon Panetta issued "prepare to deploy" orders to 6,500 active-duty troops from all branches of the military. That means they'll be ready to respond as soon as the federal government approves any civilian requests for assistance.

But the Navy didn't wait for the requests. Even before the ship left port in Norfolk, plans were being made on how to help if called on.

The Wasp, with multiple operating rooms and intensive care units, can care for more than a dozen injured people at once. The other ships in the task force also have on-board medical facilities. And the Wasp brought on an extra surgical team to either help here on the ship or to be flown on shore, with a portable clinic to provide emergency medical care in the disaster zone.

The commanding officer of the Wasp is Capt. Brenda Holdener.

"With the medical staff that I currently have on board, there is a possibility that I'd be able to take or the admiral could choose to take some of that support move them ashore to provide support to civilians if needed, if requested," Holdener said.

The ship needs about 1,000 sailors just to keep it running, but an extra 350 sailors, including that surgical team, came on board in Norfolk ready to help with missions including search and rescue, emergency communications, even air traffic control to make sure military helicopters don't collide with civilian aircraft involved in the response.

Saturday, about two dozen disaster response sailors participated in a refresher course in the use of chain saws in case they are called on to clear debris from roads or cut down trees that have fallen on homes.

But the same group has other tools at the ready, including a full-sized bulldozer parked on a landing craft in the hold of the Wasp, ready to hit the beach and begin heavy duty clean up where needed.

Capt. Holdener, a helicopter pilot by training, has a special attachment to the helicopters that are ready to start flying missions from her ship hundreds of miles from the coast.

"I bring the aviation aspect, which brings a reaching capability ashore, so from sea I could go up and provide inland support to the shore at major distances," she said.

The Wasp and the other ships were about 600 miles from the US coast when they starting moving back, that means it'll take all of Sunday and part of Monday to make the journey back.

During that journey, beneath the Wasp's massive flight deck a wide array of humanitarian assistance is being planned and prepared in the event the ships get the order to start helping out.

"I'm very prepared to respond to anything on the East Coast of the United States, absolutely," Adm. Scott said. "We've done a lot of this overseas, and supported folks in countries such as Haiti, but it's very different it's closer to home when it happens here in the United States. And our sailors have a very focused look in their eye, that we need to be ready to respond."