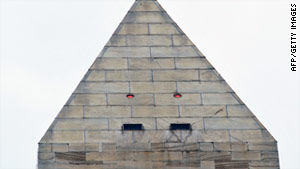 Four cracks in the monument marble were first discovered after a 5.8-magnitude earthquake.
STORY HIGHLIGHTS

According to spokeswoman Carol Johnson, when crews entered the monument Monday following the weekend's hurricane, water was pooled in the observatory near the top and in the monument's interior stairwell. Engineers had inspected the monument and tried to plug the holes before the hurricane, but Johnson said the amount of water found means that some holes were missed.

"There were some leaks that we were not able to identify or able to plug," Johnson said. "What happened was a lot of mortar popped out, so much so that you can see sunlight above 450 feet in the monument."

The Washington Monument, built between 1848 and 1884, is 555 feet, five and one-eighth inches tall. Its walls are 15 feet thick at the base and 18 inches at the top, and are composed primarily of white marble blocks, according to the National Park Service.

"The engineers have ensured us that the monument is structurally sound," Johnson said. Within the week, the National Park Service will get further estimates on the cost of damage from the engineering firm dealing with the problem.

The monument will remain closed for the foreseeable future, according to Sgt. David Schlosser, a U.S. Park Police spokesman.

"The monument is shut down, it has to be shut down till it is fixed. There really aren't any changes as far as we are concerned," Schlosser said.

Johnson says engineers have told the National Park Service that, at some point, the monument may be able to open while it's under repair.