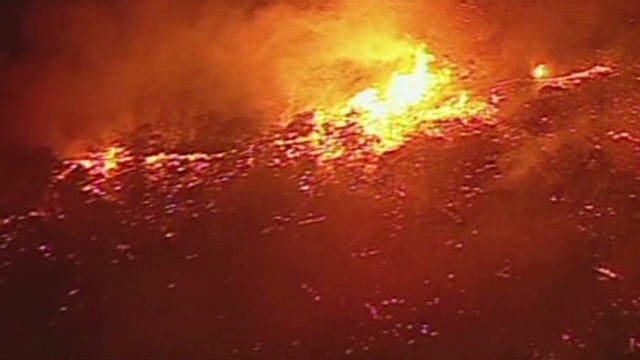 For more on this story, see CNN affiliate WFAA.

A raging grass fire in Oklahoma City, meanwhile, claimed several structures, including a barn, affiliate KFOR reported. Homes in the area were evacuated.

The 101 Ranch fire in Palo Pinto County grew to about 7,500 acres on Wednesday afternoon, and it was unclear how much had been contained, the Texas Forest Service reported.

The fire was centered around the south side of Possum Kingdom Lake outside Brad, about 50 miles west of the Dallas-Fort Worth metro area. Observers on the opposite shore were forced to pull back when winds around 20 mph carried embers across the lake.

The fire had destroyed at least 39 homes, according to the Forest Service, and another 125 households were evacuated. Firefighters were getting support from aerial tankers and helicopters that were dropping water on the blaze. Nine RVs were burned.

On Wednesday morning, firefighters reported they had "hooked the heel" of the fire, which means they established an anchor from which they can begin extending lines along its edge.

The cause of the blaze was not immediately clear.

Texas is up against its worst fire season in state history, according to officials. A record 3.5 million acres have burned since the start of the season last November as hot and dry weather, coupled with a historic drought, have made conditions ripe for rapid fire growth.

Firefighters are now battling a total of nine wildfires, which have consumed about 16,000 acres, the Forest Service says.

Jerry and Silvia Overton were among the residents who were forced to flee as the 101 Ranch fire closed in on their homes. The fire "got away" from the firefighters, and "the only escape route we had at that time was the marina," Jerry Overton said.

He and his wife got on their boat, let others without boats onboard, and watched the thick, black smoke for a bit before going across the lake to the harbor.

On Wednesday, he inspected the house and saw that outside of some possible smoke damage, it appeared unharmed.

Yet the experience of evacuating -- the second time they had to do so since April -- was a frightening one.

"The first time back in April (was) scary, but this was horrific," Silvia Overton said. "This time I really felt we could lose everything."

"There's still a lot of work going on and a lot of stuff that's being threatened and they are doing the best they can to protect structures," said John Nichols with the Texas Forest Service.

Boats such as the Overtons' were used to ferry some evacuees across Possum Kingdom Lake, he said.

"I don't think I have seen it this bad anywhere," Nichols said. "Walking across somebody's yard that just crackles under your feet because the grass is so dry. It's just a tough, tough situation."

Firefighters in Huntsville, in east Texas, battled a 100-acre fire. Two structures were lost and 10 homes were threatened.

Texas and Oklahoma are the worst-hit of several states in a band of severe drought that stretches from Arizona to sections of the East Coast. More than 90% of the state is suffering from "extreme" or "exceptional" drought conditions, according to the U.S. Drought Monitor at the University of Nebraska at Lincoln.