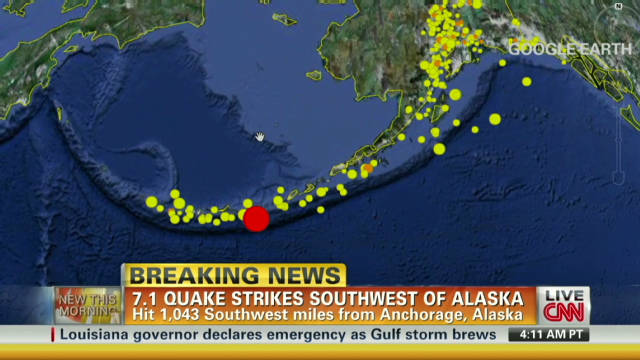 (CNN) -- A 6.8-magnitude earthquake struck Friday off the coast of Alaska, the U.S. Geological Survey reported.

The Geological Survey initially measured a 7.1-magnitude quake, but later downgraded it slightly. It was 22 miles deep, the Survey reported.

The earthquake occurred 120 miles east-southeast of Atka, Alaska, in a sparsely populated part of the Aleutian Islands known as the Fox Islands. The epicenter was 1,030 miles west southwest of Anchorage, the Geological Survey said.

It prompted a brief tsunami warning for coastal areas of Alaska, from Unimak Pass, Alaska to Amchitka Pass, Alaska, the West Coast and Alaska Tsunami Warning Center said. That warning was later cancelled.

No destructive tsunami happened -- and no tsunami danger exists along the coasts of Alaska, Canada or the U.S. West Coast, the center said.

There were no immediate reports of damage or injuries.

A 7.2-magnitude earthquake occurred in almost the same spot in June, according to the Geological Survey.