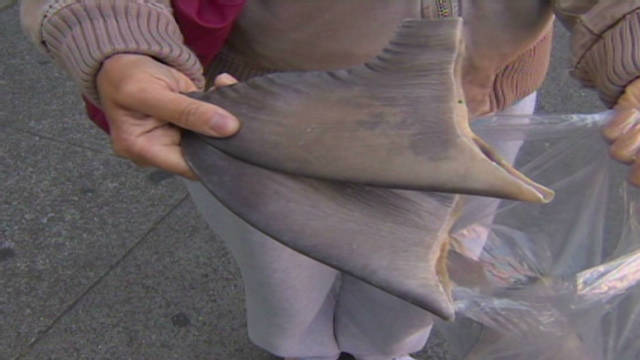 (CNN) -- A Chinese delicacy may soon disappear from California restaurants if a bill to ban the sale of shark fins makes it through the state Senate.

A symbol of wealth and luxury, shark fin soup was once prized by Chinese emperors for its rarity. Today, it's typically served at weddings and banquets to demonstrate a host's good fortune.

But it comes at a high price, for one's wallet and the environment. Shark fins, which fetch up to $600 per pound, are sometimes acquired through the controversial practice of finning: a shark's fins are cut off and the rest of its body is tossed into the ocean.

California, home to 1.1 million Chinese-Americans, is one of the largest importers of shark fins outside Asia. The California Shark Protection Act would make it illegal to possess, sell or trade shark fins.

The state Senate is expected to take up the legislation next week.

The issue goes beyond animal welfare, the bill's supporters say. Most sharks are at the top of the marine food pyramid, according to Shark Alliance, a global, not-for-profit coalition of non-governmental organizations. Tens of millions of sharks are killed each year, either intentionally or as a bycatch of fishing operations, threatening the balance of ocean ecosystems.

"It's time to stop serving a soup that is driving sharks to extinction," says Assemblymember Paul Fong, one of the bill's sponsors. "The cultural issue is very minor compared to the major environmental devastation of eliminating sharks for our world's oceans. Chinese Americans are environmentally conscious -- we believe in harmony with nature and it's in our culture to support protecting the environment."

Critics of the bill say it unfairly singles out the Chinese community. The bill only restricts the sale of shark fins, which are used almost exclusively in Chinese cuisine. The bill does not apply to other shark products like oil or meat.

"I think for the ban to be culturally blind it has to ban all the products that have to do with sharks, shark meat, shark oil," says Vicky Ching, the owner of Ming's Restaurant in San Francisco.

Ching pulled shark fin soup from the menu last year as criticism of finning grew, but she says she still serves it on request.

Not all lawmakers support the legislation. Assemblymember Mike Eng said there was a lack of dialogue with the Chinese community before the bill was introduced.

Diners at Ming's Restaurant on a recent weekday afternoon were also divided on the issue.

"It seems to me that it's such a part of the Chinese culture, I'd like to see it preserved," one man said.

On the other hand, "We're in the U.S.," a female diner said. "We have so many foods to eat, why kill a shark for a little fin?"