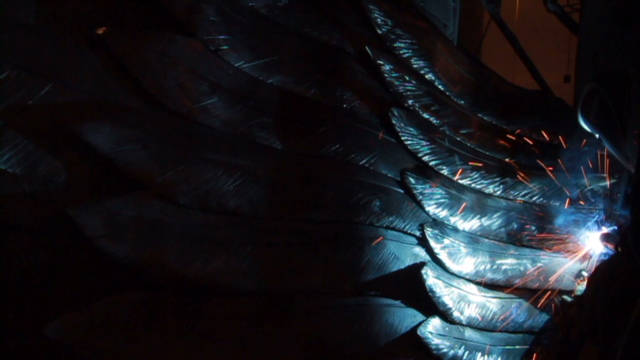 Wings for the fallen: 9/11 in metal
STORY HIGHLIGHTS

Atlanta (CNN) -- He once walked through fire; now, he's using fire to forge a September 11 memorial. Artist, sculptor and former Marine firefighter Curtis James Miller will unveil his memorial Sunday, the 10th anniversary of the terrorist attacks, in an Atlanta suburb.

He recently spoke to CNN about his work; here's an edited transcript of that interview:

CNN: Tell me a little about how this project started.

Curtis James Miller: Doug Harms, who works with (the) DeKalb (County) Fire (Department), approached me about doing this memorial. I guess he saw my work online. So, he contacted me and told me about his idea to do a memorial outside the fire station using a piece of Trade Center steel. From the time we spoke, I kind of had one idea stuck in my head: the phoenix wing, rising out of the ashes.

CNN: Where were you on September 11?

Miller: I was somewhere in the middle-end of my firefighter training in the Marine Corps. So that day really put a picture of reality on the job I was doing both as a firefighter and as a Marine.

CNN: How long were you a Marine?

CNN: How did you decide to make the jump to art after your service?

Miller: I've always done art. I did it before I went into the military, and now I'm continuing with it. I went to (the Savannah College of Art and Design) when I transitioned back. I've graduated since then, and now I'm sort of a vagabond in life right now. It really gives me a great opportunity to do what I want to do. And this project is part of it.

CNN: You've said you enjoy doing memorials. Why is that?

Miller: I see myself, the artist side of me, as a storyteller. And I don't really see art as all that important. It's something I do, it's something I've done, it's always a part of me, and I enjoy it. But I'm not building bridges; I'm not saving people's lives; I'm painting pretty pictures. So the importance to me of art that I can do is to memorialize people who deserve it. So this is really a chance for me to say these people are important. With this memorial specifically, it kind of dawned on me the other day: It's not just about 9/11. It's not just about that day. It's about the people that lost their lives and that were affected and lost family, friends, but it continues, especially doing this 10 years later, it's about the people that continue to serve. Before 9/11, after 9/11, they're still important. And this memorial sort of brings that to light. And to me, that's important. To keep people's minds open. And that's kind of what art can do.

CNN: What materials are you working with for this piece?

Miller: It's steel. And it's handmade. It's been myself and my team working at all hours of the night. In all temperatures of the (summer) heat. And adding to that temperature, the forges and the heat and the welding and the leather protective gear we're wearing.

CNN: Is there any significance with the number of feathers on your sculpture?

Miller: My uncle called me in the beginning of the build and said 343. And I said, yeah. That's the number of firefighters that died in 9/11. He said 343 feathers. I kind of looked at my drawings and design. I said maybe I could maybe make it happen. But the feathers are too big, and there wasn't enough room to make it happen. But wings in general mean a lot. And everybody has their own connection to them.

CNN: What will it look like when it's all finished?

Miller: It will be set on a solid piece of granite that's in the shape of a pentagon. Not just to symbolize that building alone but the military and country. And having that ... phoenix wing coming out of the ashes with that piece of the trade tower there, that wing can incorporate some of the emotion of the planes that were hijacked. And then we'll have flight markers made out of granite. Four, one for each flight, with a timeline of all of the events for each flight on each marker. So the whole site is in a 52-foot circle in front of DeKalb County police and fire headquarters.

To learn more about the memorial, visit the DeKalb 9/11 Memorial Project website.