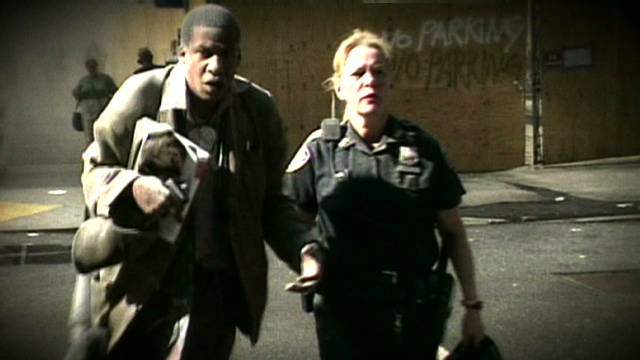 Beyond Bravery: The Women of 9/11
STORY HIGHLIGHTS

New York (CNN) -- A few weeks ago, a group of about two dozen female rescue workers walked onto the platform overlooking ground zero.

Most had not seen the place in years, not since big iron beams rose into the sky to build the skeletons of a new office complex, not since the footprints of the Twin Towers were filled with black stone and waterworks, not since all the progress that followed those dark days back ...

New York Police Department Deputy Inspector Terri Tobin was buried in the rubble of the old towers twice on September 11, 2001. She had a huge glass pane lodged in her back and cinder block cut her skull. She rose from the debris like some kind of superhero and rescued people who were in a panic -- the injured, the desperate, the scared. At one point, she clung mightily to one man's arm and said: "I'm with the NYPD. I'm not gonna let go."

She didn't let go. None of these women let go.

Capt. Brenda Berkman searched relentlessly for her fellow firefighters. She still cries, to this day, about the 343 who died. She knew most of them. Officer Carey Policastro searched the pile of debris for weeks, exposing herself to horrible conditions. Then she dedicated herself to preparing for the next attack, training first responders around the country.

There were women from the Salvation Army and Alcohol, Tobacco and Firearms, emergency medical technicians and clergy.

There were plenty of female journalists there, too, including one of my producers, Rose Arce. She was featured in a book called "Women At Ground Zero" -- along with all these first responders -- written by Susan Hagen and Mary Carouba, two California authors who wanted to memorialize the accounts of the women. That book was published nearly 10 years ago and memory fades.

I don't think there was any task that was performed down there by men that were not performed by women.
--Terri Tobin, NYPD

A few months ago one of the female firefighters from that book came to speak to the kindergarten class of my producer's daughter. A little boy asked her how she could be a "fireman" if she was a girl.

In answer to that question, we produced a documentary that premieres on Labor Day at 11 p.m. ET and PT. It is called "Beyond Bravery: The Women of 9/11." It chronicles the heroics and hardship of these women as they have worked to repair our nation in the decade since the terrorist attacks. As one woman in the documentary says: "Little boys and little girls need to know" that women were there and served with courage.

It was hard for the women to stand in that space where they fought so hard and lost so much. To this day when anyone looks out over ground zero, the question lingers: How do you fill this void?

Tobin became a deputy inspector of the New York Police Department, helping it cope with a traumatized force that has turned over a third of its ranks since 9/11. She also answers calls at a hotline for cops under stress. Berkman gives tours of the Tribute WTC Visitor Center to recall the losses suffered that day.

'We have to be safe' from terror

Female cop: I was meant to do this job
RELATED TOPICS

In my conversations with these women, I have heard their stories of how they sacrificed their lives to rebuilding, recovering and restoring hope. They want to fill that physical void of ground zero with a fitting tribute to the friends they lost. They want to see people working and living and smiling again. They are fighting to get good health care, to contribute to U.S. efforts at homeland security, to prepare the fire and police departments for potential attacks, and to help others repair their psyches after witnessing the worst possible.

What makes the women different is that they fought for the jobs they had on September 11. Berkman sued the fire department, paving the way for women to join in 1982. Regina Wilson, who was hired in the wake of that lawsuit, was a probationary officer on 9/11. She rode to the flaming towers that day and was one truck away from being killed.

There is a memorial to firefighters near ground zero that has no identifiable women's faces, but they were there.

Many of the women felt slighted in the days following the attacks because they heard talk of a brotherhood of rescue workers that had performed heroically. The public forms images from big historic events like the terrorist attacks about who was heroic.

When I asked her if she thinks the public knows that, she shook her head sadly.

Yet their journey this past decade stands out because they are still fighting to bring women into the ranks. There are fewer female firefighters, and they are a smaller piece of the force than they were on 9/11. The police department is just 17% female, generations after the first woman joined. These are not unusual percentages in this country, although the U.S. Department of Homeland Security is one-third female after being formed in 2003.

There is still resistance to the presence of women -- and minorities -- in the uniformed services, even as they actively recruit them. The New York fire department has for years been defending against a racial discrimination lawsuit.

The women don't dwell on the conflicts though. They prefer to recruit by example, by putting themselves out there in uniform and talking about their work. There is nothing like seeing a real-life hero and dreaming you could be one too. They don't limit that PR campaign to women.

That recent day on the platform, it was raining and gray and sad as cranes lifted beams in preparation for a September 11 unveiling, a test of whether a memorial can coexist with office towers. The women chatted about the height of the new towers, remembered tearfully where they were the day of the attack, and marveled at how much time had past.

It was just as well the sky was gray. Berkman said to me recently: "September 11 made us all feel like we could never trust a sunny day again."

Student News: Beyond Bravery: The Women of 9/11-- Educator and parent guide